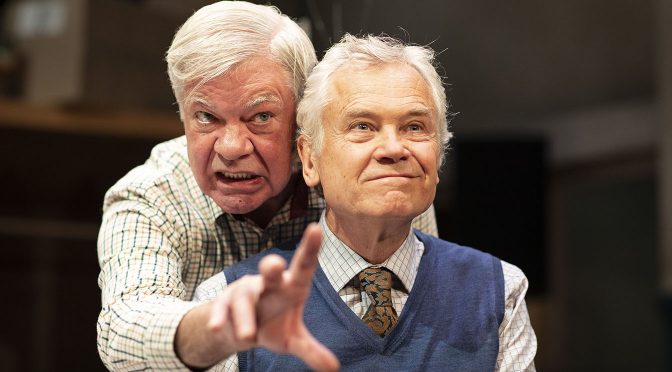 Just about to start a tour as theatres began closing due to coronavirus, this revival of Alan Bennett’s 2009 play was recorded at a closed performance on what should have been its opening night. With special thanks to those who made this happen, justly keen to show off their hard work, Philip Frank’s production makes an excellent case for the piece by carefully playing to its strengths.

Using the device of a play-within-a-play, an imaginary meeting of poet WH Auden and composer Benjamin Britten is rehearsed by a none too happy cast and crew – full of the excitement and tension surrounding live performance we’re all missing so much at the moment. Franks does an excellent job with the behind-the-scenes feel – Adrian Linford’s design deserves credit, too – getting the most from Bennett’s comedy.

Right from the start, Veronica Roberts and Jessica Dennis, as the show’s stage managers, share Franks’ appreciation of Bennett’s humour. And taking the leads as those playing Auden and Britten respectively, Matthew Kelly and David Yelland do an expert job: their characters are a couple of old hams, as you might expect, hitting every aside perfectly. Of course, it’s a shame not to experience this live, as Bennett can really make an audience howl – and hearing just the laughter from a few crew members is a little sad. But nobody would miss this more than those on stage, and yet each joke still lands. Even better, lines are frequently tinged with a melancholic edge that shows deep appreciation of the text.

A wistfulness within The Habit of Art, coming primarily from the elderly characters – skilfully written and expertly conveyed here – becomes an unexpected problem. At this moment in time, the play shows its age to its detriment. Acknowledgement of Britten’s attraction to young boys, along with a male prostitute who features within the play being put on, sit uncomfortably with current concerns. It should be pointed out that Bennett wants these “boys of art” to be given some kind of due; but the argument for, and nature of, this acknowledgement feels confused and the issues passed over too lightly.

Such problems were clearly not at the forefront of Bennett’s mind when writing. Instead, concerns about creativity were the job at hand. Questioning sincerity and authenticity in ‘art’ and combing humanity with grandeur in the ‘artist’, both the historical subjects and Bennett’s own fictional creations are fully utilised. It’s a mix of high-falutin’ ideas and jokes about genitals that few could manage.

The balance is seen in the performances, too. While Kelly’s character struggles with his lines, he still manages to show what a pro he is, making Auden’s obsession with time very moving. Meanwhile, Yelland does a brilliant job of hinting at his character’s haunted past. No stranger to acclaim himself, this look at the great (if not so good) of ‘art’ could be cold and abstract. But Bennett, with the help of all in this skilful revival, makes it alive and vital. The habit referred to in the title focuses on the labour involved in making art. Here, that effort, while as thought provoking as intended, is made to seem both easy and enjoyable. And that’s a job well done.