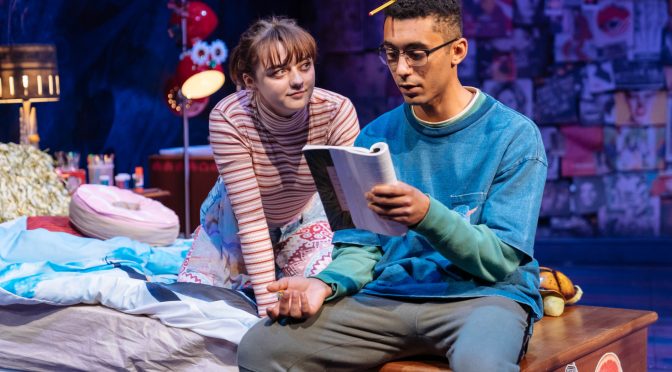 While not being able to visit the theatre, or blog about it, is low on the list of most people’s problems right now, any glimpse at a big part of my normal life is welcome. I’m grateful to Hampstead Theatre for streaming this play, first seen on its stage last October, and a chance to get as close to theatre as is currently possible.

Lauren Gunderson’s two-hander has its teenage characters occupied with death and art. Caroline is waiting for a liver transplant, trapped in her room for health reasons, while Anthony from her school is assigned to work on a poetry project with her. It’s serious stuff, but not as heavy as it sounds. Gunderson has a nice way of lightening the themes with some surprisingly gentle comedy.

The performers, Maisie Williams and Zach Wyatt, are good with the jokes and Gunderson’s strong characters are a gift to them. Williams makes Caroline’s self-definition as “small and mighty” believable – the character is abrasive and obnoxious, but above all appealingly honest. It’s no small achievement to see past the illness to get a well-rounded role: her hatred of the “kittens and winky faces” people send her on social media, as well as her obvious intelligence, come through. And surely you have to admire someone who names their cat Bitter. Wyatt has a harder job but also does well: Anthony’s enthusiasm for the poetry of Walt Whitman feels forced, but it’s easy to see how it would have worked better on a stage than on a screen. For a lot of the piece, there’s too much of the teacher about him for someone who is supposed to be Caroline’s peer.

There are other problems, although all are mitigated by Edward Hall’s skilful direction. Claiming I and You is too shouty might be subjective, but there are clunky touches around sudden love and pain. We can pass over Caroline’s knowledge of a poem she supposedly hasn’t read, but her enthusiasm waxes and wanes too abruptly. And, while the budding friendship between the two youngsters is mostly touching, a potential romance feels superfluous. The play’s twist, which has potential, arrives a little too late and feels underexplored.

Nonetheless, this is a work of focus and skill. Gunderson has a strong ear for speech. The kids’ project is on pronouns, and proves thought-provoking, while Caroline’s dialogue, with its “prefaces” and “postscripts”, is fascinating. While there’s plenty of talk of collages, and how strange they can be, Gunderson’s work is far from bricolage and all the better for it. Caroline’s artwork focuses on close-up photography – the beauty that most of us miss – a quality shared with detailed moments in the text. I look forward to seeing Gunderson’s work live at some point and promise I’ll attend whatever show she, or Hampstead Theatre, has on as soon as I can.