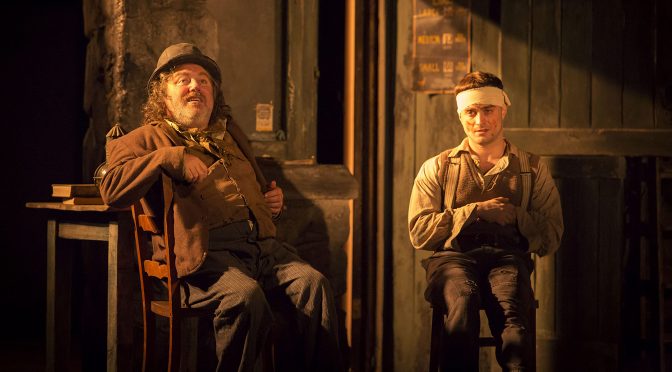 The latest star on stage in Michael Grandage’s season at the Noël Coward theatre is Daniel Radcliffe, taking the title role in The Cripple of Inishmaan. Martin McDonagh’s 1996 comedy, set around the arrival of a film crew making a documentary in 1930s Ireland, is a viciously funny piece that’s worth seeking out regardless of casting.

All eyes are on Radcliffe, of course, and the pressure on the critic to give a verdict pales in significance with that on him to perform. His accent isn’t as strong as those of other members of the cast, and he doesn’t have the same comic aplomb, but there’s nothing here to be ashamed of. Making the role even more physically demanding than it needs to be is testament to his determination, and his thoroughness impresses.

And in terms of Radcliffe’s career this is a clever move. The Cripple of Inishmaan is an ensemble piece. Radcliffe gets further credit from a controlled performance as part of the group; there’s never an attempt to upstage, and his intelligence about the dynamics on stage, shared by director Grandage, is clear.

There are several wonderful performances to enjoy. Pat Shortt shows himself the natural comedian as Johnnypateenmike, the village’s self-appointed news service: the scene with his ‘drunken mammy’ June Watson had me in tears of laughter. And Cripple Billy’s adopted aunts Ingrid Craigie and Gillian Hanna have a marvellous command of the stage that reveals their appreciation of McDonagh’s language.

It is the writer who is the real star here. McDonagh’s depiction of a rural community so dull that Billy’s only entertainment is to watch cows, and so insular that everyone regards this as a little risqué, is deliciously offensive. The jokes are worthy of any stand-up and the entertaining plot turns continually enforce serious, satisfying themes. McDonagh’s playfulness, with audience expectations and prejudices, make this revival a welcome one. And you get to see a star into the bargain.

Written 24 June 2013 for The London Magazine