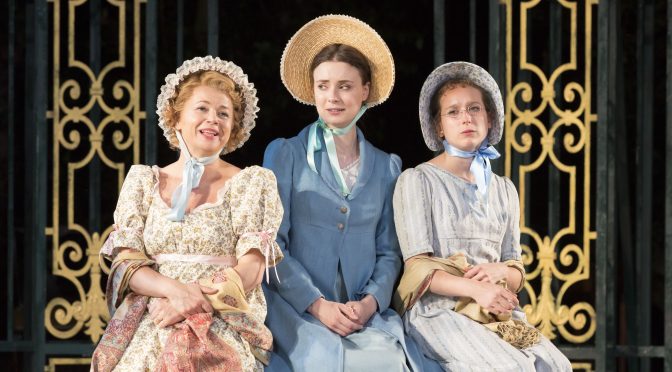 It’s a brave soul who takes on the task of adapting Pride and Prejudice, one of English literature’s best-loved novels, for the stage. Jane Austen is so famous she might be on a bank note soon, and the fact that this book is a masterpiece has to be – dare we say –universally acknowledged. But Simon Reade’s interpretation of the love lives of the Bennet sisters will please diehard Austen fans, preserving swathes of conversation rather than dumbing them down, while still presenting a light romcom that makes for a hugely entertaining evening.

A few minor characters are casualties of the adaptation (who would have thought you would miss Mr Gardiner?) and the Bennets are denied trips to Brighton and London. The action is concertinaed to satisfying theatrical effect, with an emphasis on laughter. Director Deborah Bruce uses designer Max Jones’ set dynamically (there’s a great scene in the portrait gallery of a palatial home that uses the whole cast). Toward the climax, the revolving stage could be joined by a revolving door to the Bennets’ home – visitors arrive so thick and fast – but the speed of the show employs the sillier aspects of Regency Romance to comic effect.

The biggest loss, unavoidably, is Austen’s own voice. The task of delivering her irony falls on the cast and the performances reflect Austen’s wit superbly. Rebecca Lacey is wonderful as the foolish Mrs Bennet and Timothy Walker gives a weighty performance as her long-suffering husband. There are strong performances from minor characters, with Jane Asher frozen with imperiousness as Lady Catherine De Bourgh. The Bennet sisters are portrayed convincingly as a family group, and differentiated effectively. Amongst their suitors, Ed Birch almost steals the show, with his crane-like Mr Collins – full of “servility and self-importance” – getting plenty of laughs.

Just as the novel belongs to Elizabeth Bennet, the night is, fittingly, owned by the actress playing her – Jennifer Kirby. Making her professional debut in the show, Kirby takes on the mantle of plenty of people’s favourite heroine with an unaffected charm. My bet is that Kirby was a fan of Elizabeth long before she landed the part, and her performance makes you love this great heroine even more.

Written 26 June 2013 for The London Magazine