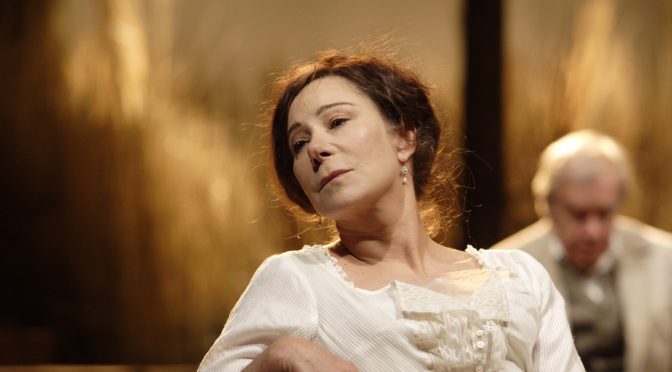 Director Howard Davies is well known for his work on Russian classics. Last year, his production of The White Guard did phenomenally well at the Olivier Awards. His new production of The Cherry Orchard is a quality affair from a director who doesn’t rest on his laurels.

Davies is working again with designer Bunny Christie. Her set offers the first glimpse that this is something different: there’s no trace of quaint dacha here and not a samovar in sight (for that, you have to nip into the National’s bookshop for a particularly twee display), a set is a huge barn of a place, that really is dilapidated, whose owners are in dire financial straits.

Andrew Upton joins the team again with a text that is wilfully modern. Every effort has been made to make Chekhov’s story of the landowning Ranyevskaya seem contemporary. It will certainly jar on some ears. Maybe in our credit- crunched times her poverty rings a chord, but Ranyevskaya isn’t a member of the squeezed middle. She’s a frightful snob, yet her obstinate refusal to recognise the reality of her situation is conveyed with charm by Zoe Wanamaker.

There is little sense of Ranyevskaya’s journey in this production. Like her brother Gaev (James Laurenson) she seems little aware of the times she is living in. A sense of history that Chekov certainly saw as a theme of his work is diluted, the production seems more immediate and less didactic, but it’s a trade off that is debateable.

Wanamaker’s performance is generous, allowing the other characters to shine out: stories of lovers of different ages and status, all given equal weight, bring out the plays rich complexity. Kenneth Cranham is a truly revolting Firs, playing with Emily Taaffe’s Dunyasha with great cruelty. Mark Bonnar is convincing as Petya Tromfimov, one of those scholastic characters Russian dramatists love that are so difficult to perform; his impassioned relationship with Anya (Charity Wakefield) is a highlight of the evening.

Lopakhin, the merchant whose capitalism is so much at the core of The Cherry Orchard’s historic concerns, is played by Conleth Hill with passion. Hill is perfectly farouche and, if not quite believable as the businessman who could save the estate, his fragility makes his the most moving performance of the night.

All the casts’ performances are mobile, running around in a play that is usually static. The party scene is particularly raucous. These Russians know how to live it up but, of course, not how to live. The pain as they all try to find a place for themselves in their changing world easily transcends historical circumstance. Davies preserves the philosophical dilemma at the heart of The Cherry Orchard while presenting it with fresh eyes.