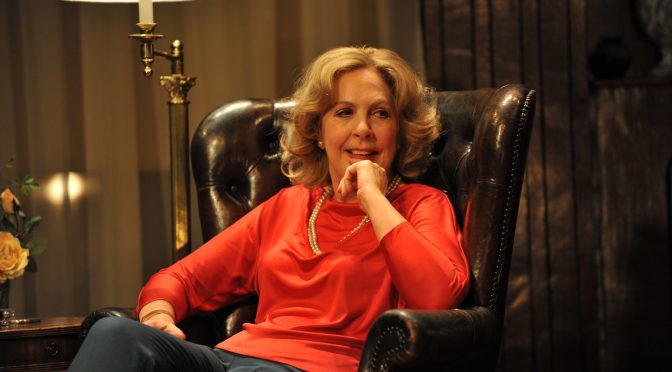 Edward Albee’s A Delicate Balance is the story of an elderly couple whose twilight years are disturbed by an alcoholic sister-in-law, a daughter’s failed marriage, and their best friends’ nervous breakdowns. A thought-provoking meditation on the duties of family and friendship, as well as an examination of the American dream, this is a fantastic piece of writing that’s ambitiously broad, but so intelligent and challenging that it is always absorbing.

Albee’s observations are inspired. Often more startling than sure-footed, they can jolt an audience to attention. Agnes and Tobias, the elderly couple in whose house we, and all the characters in the play come to stay in, form the focus of observations on age and gender. Agnes fears that she will come “adrift” in senility and claims her husband’s life has been easier than hers – all men have to worry about is “making ends meet until they meet the end”.

Unfortunately, the writing here is far stronger than the production. Albee has created a stifling social world of guarded conversations, full of innuendo, but director James Macdonald does it little justice. Desperation is conveyed too quickly, with no sense of the slide into apathy.

This fault matters less with characters clearly on the edge. Harry and Edna are the best friends who seek refuge due to their inexplicable fear. Diana Hardcastle’s panic is conveyed superbly, likewise her battle to stay and claim the ‘rights’ of her friendship with Agnes. Imelda Staunton plays Clare, the alcoholic sister-in-law, with wit and perspicacity.

But the production falters with its central characters and the talented cast never satisfactorily deals with Albee’s articulacy. Penelope Wilton’s Agnes is too magisterial and Tim Pigott-Smith’s Tobias always so close to a breakdown it is hard to imagine him as the conventional man he has always seemed to be.

The skeletons in this family’s closet are so easily exposed you wonder if the wardrobe door was ever closed. Macdonald’s indelicate production destroys Albee’s cleverly constructed rhythm – too much weight is given to calls to activism and not enough to either the humour or humanity of the piece.