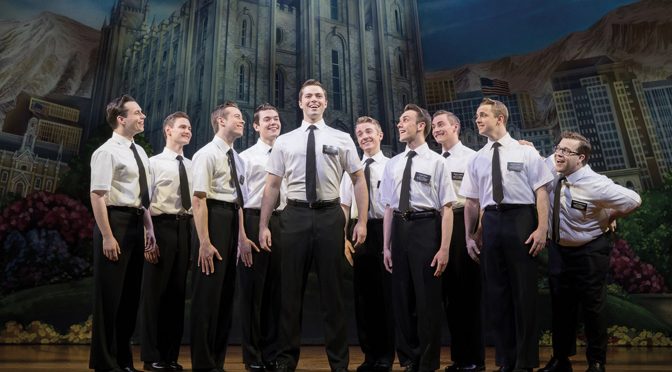 As a contrast to the fringe productions I’ve been enjoying lately, I treated myself to a West End show. Hits don’t get much bigger than this one from Trey Parker, Robert Lopez and Matt Stone, which has run in London since 2013. It’s a piece that excites people who don’t normally go to the theatre, let alone to musicals. And, generally, you don’t hear a bad word said about it… although that might change here.

Billed as the funniest musical of all time, its idea seems to be that the creators of South Park and Avenue Q insult everyone equally and so their offensive jokes are OK. OK? It’s true that in this story of Mormon missionaries in Uganda the topics of religion, Americans abroad and African corruption are all targets. And the show is funny.

For crude jokes, The Book of Mormon can’t be beat, with gags around taboo topics and the inhibitions and aspirations of its teenage heroes. There’s little effort to give the characters depth (kind of a joke as well) but the plot is effective – a simple journey of self-discovery – leading to strong roles for the leads, Price and Cunningham, that Dom Simpson and Tom Xander revel in.

The show has its smart humour, too. Focusing on something religion and theatre have in common – imagination – is a clever move. As Cunningham rewrites religion, winning converts as he tailors a new narrative, we end up with that most traditional of musical devices – a show within a show – that’s very good indeed. Choreography from Casey Nicholaw (who co-directs with Parker) is especially good (and funny) often aiding the story as well as getting laughs.

So why reservations? Humour is subjective, although I’m surprised more people aren’t uncomfortable with the material here, no matter how tongue in cheek. And it’s clear the show doesn’t quite know what to do with its female lead (although Leanne Robinson works hard in the role). But for me, it’s bite that is really lacking, making the satire predictable, cold and calculated.

Just naughty enough to provide a frisson of excitement, even if it does contain some cruel truisms, The Book of Mormon’s box office surely indicates it’s a long way from radical. There are more challenging musicals, with smaller marketing budgets, even if plenty were inspired by this one. Given its London home, you might recall Jerry Springer the Opera? I’m sure someone has written a compare and contrast. With the exception of the number ‘I Am Africa’, attacks are simplistic and the final see-it-coming-a-mile-off gag reveals a show just preaching to the choir. With no self-deprecation or challenge, and an eagerness to poke fun at easy targets, it’s possible that the last joke of the night is on the audience.