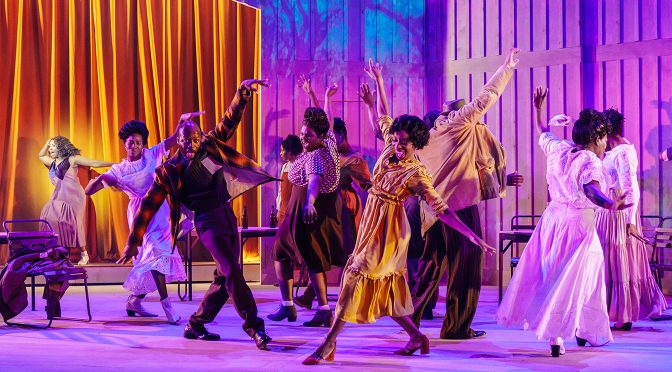 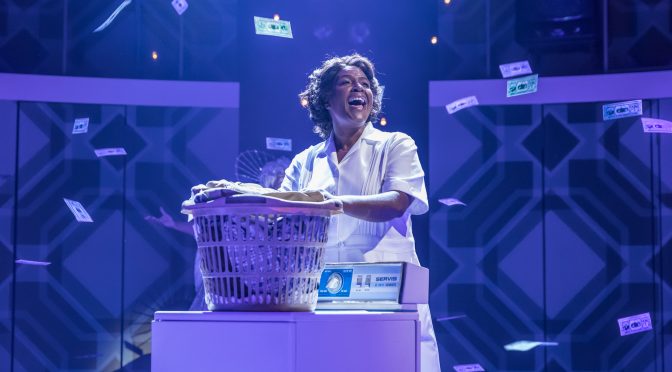 Well done to Edward Hall for bringing this Chichester Festival production to London. Director Michael Longhurst’s modest treatment of this major musical, about racism in the American south, has an intimacy that increases its intensity. The talents of Tony Kushner and Jeanine Tesori are awe inspiring, and this work ground breaking. The piece is sung throughout, so there’s a case for calling it an opera, but the genre doesn’t matter – this is simply something everyone should see.

Caroline, Or Change is at heart a “small domestic tragedy” about a middle-aged black maid, her children, and the family she works for. It’s a given that Sharon D Clarke would be good in the title role, but it’s a thrill to see just how great: her voice gives goose bumps and she portrays Caroline’s tough life, and harsher attitude, unflinchingly. Making Caroline heroic is interesting in itself, and seeing her through the eyes of Noah, the young boy she works for, is a brilliant device. She is not a wholly sympathetic character and Clark’s triumph is to balance the dramatic tension that results from this.

Following Caroline’s day, the washing machine, dryer, radio and bus she travels on all get songs. That might sound like Disney, but the music is for grown-ups and powerfully performed by Me’sha Bryan and Ako Mitchell, while T’Shan Williams, Sharon Rose and Carole Stennett make up a 60s-style singing trio. When allowed to keep coins Noah leaves in his laundry, Caroline’s struggles to take the child’s money. And all is played against the backdrop of the Civil Rights movement. So there’s change, big and small, with a heroine so poorly equipped to deal with either it becomes heart-breaking.

Kushner is a big ideas man, and there’s plenty of challenging thinking here. But these lyrics must count as some of the most extraordinary written. Along with propelling the plot, extending the family dramas and explicating historical events, the complexity of emotions expressed is remarkable. There’s wit, which makes many lines laugh out loud funny, and breath-taking imagery. Much of the text is pure poetry.

Matching Kushner’s skill with words comes the music of Jeanine Tesori. It’s a huge achievement that these lyrics never feel compromised: always clear, not a word out of place. The musical references have to be various, there’s a clash of cultures to evoke alongside a period feel. With gospel and blues comes Jewish folk music, the American anthem and Christmas carols. Weaved into all of these, with massive intelligence, are motifs for characters that provoke huge emotional impact.

Kushner and Tersori are smart and know great works require originality. Caroline, Or Change isn’t quite like anything else. It’s not just a matter of quirks – although it has delightful surprises – or contrariness. The audience goes home on a high (as it should). But Caroline’s fate is realistic, and any feelgood comes from the legacy of her children: led by her daughter Emmie, who wants to embrace the new and is given a suitably inspirational depiction by Abiona Omonua. Caroline herself can’t change. Given her life, could you? But putting such a fallible figure against dramas big and small is an important triumph of its own.