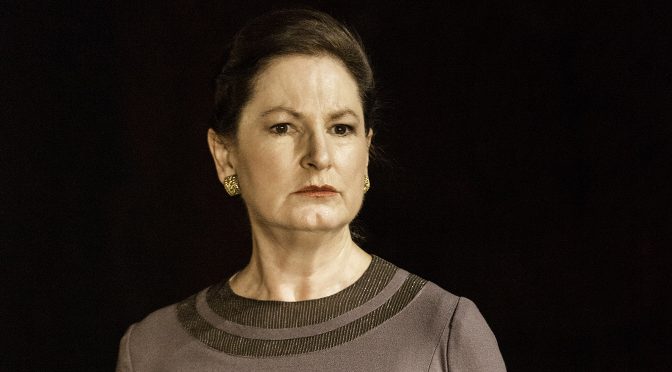 It’s a shame not to be able to rave about Josie Rourke’s Donmar Warehouse production of Shakespeare’s Roman epic a little more. The idea of putting the title character’s mother, Volumnia, to the fore is excellent and leads to the performance of a lifetime from Deborah Findlay. But Coriolanus is a tricky play, with an unappealing central character and short crowded scenes that are tough to make convincing. Although Rourke tries hard to inject energy and aid comprehension, the play frequently drags and hard to follow.

Rourke recreates the battle scene (where Caius Marcius wins his honorary surname of Coriolanus) with chairs and ladders – it probably looked better on stage but it is tough to follow. And a hard-working cast doubling up as politicians from different sides is also confusing.

It’s difficult to care about Coriolanus and his obsession with honour – even his arrogance becomes repetitive. How good a politician might he be? Is he truly modest or just another hypocrite? Such questions become unsubtle in a show with lots of shouting and moving around, none of which helps you work out what is going on or makes it exciting.

Thankfully, Deborah Findlay makes the show more than worth watching. Every scene with Volumnia is marvellous; from her introduction as the mother who would rather have a “good report” of her son than have him survive a war, to her creepy adoration of his battle scars. Findlay makes the exaggerations everyone spouts make sense. Rourke’s focus pays off and if the show uneven – aren’t we just waiting for these scenes? – it’s worth it. Here, Rourke has added to our interpretation of the play and brings out the best bits.

It’s not that the rest of the cast is bad – far from it. There are good turns from Elliot Levey and Helen Schlesinger as the tribunes who plot against Coriolanus, and making them lovers is another good idea. Mark Gatiss, as Menenius, gets better as the show goes, with a “cracked heart” from his last meeting with Coriolanus that is effective.

As for our leading man, Tom Hiddleston is very good indeed. It might have been interesting to explore the suggestion of “witchcraft” in the role, but Hiddleston is more than a little scary and brings out the character’s urge to be the “author of himself” well. Hiddleston can hold a stage superbly and, with Rourke’s impressive visual sense in this literally bloody show, helps creates some memorable images.

Yet even Coriolanus ends up seeming something of a foil for his mother – Findlay is so good. On her son’s exile, Volumnia refuses to cry, saying “anger’s my meat” in chilling fashion. That she finally begs Coriolanus is all the more moving – no wonder Hiddleston is reduced to tears. Even here there is a manipulative edge (see how she ushers her grandson towards his father) and note that this tragic dilemma is hers. Coriolanus says his mother deserves to have a temple built to her. It’s one of the few sensible things he utters. But, recalling Matthew Dunster’s idea about Cymbeline a few years ago at Shakespeare’s Globe, it might be an idea to change the title of this play, too? From Coriolanus to Volumnia anyone?