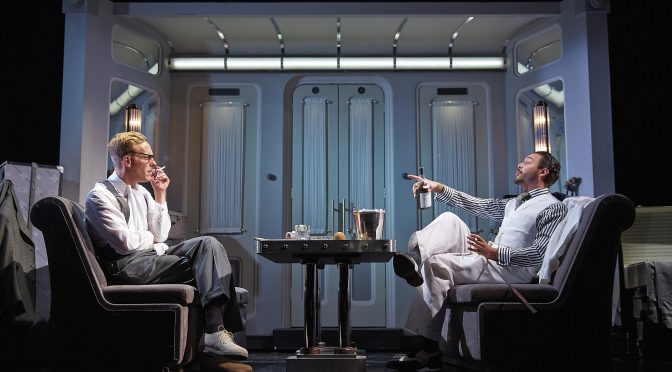 Most people know Strangers on a train because of Alfred Hitchcock’s 1951 film. As with the director’s earlier work, Rope, it was based on a novel by Patricia Highsmith. Hitchcock must have been a fan, and it would be nice to think he would approve of writer Craig Walker adapting the book, rather than the movie, for the stage.

Presenting Highsmith’s take on the ‘perfect murder’, with two strangers killing for one another, thereby securing alibis and depriving investigators of motive, it’s a disturbing journey worth taking.

It’s a shame that director Robert Allan Ackerman’s production contains so many frustrations. After a bold move away from the screen, continual projections make us feel we are watching a movie and some frankly hammy music sets a period feel in the worst possible way, being both clichéd and melodramatic.

The first act is taken at a disconcertingly swift pace: this is Highsmith on a high-speed train. It’s all so quick that the performances disappoint a little. Laurence Fox and Jack Huston are the strangers, Haines and Bruno, who kill an unwanted wife and a father holding back a legacy. Fox’s accent slips as he rushes the lines and there are times it is difficult to hear Huston. The possibility of homoeroticism, so potent in Highsmith’s work, is also an issue. These are remarkably sexless performances (was this a conscious decision?). Of the secondary characters, only Imogen Stubbs, who plays Bruno’s mother with a knowing nod to Blanche DuBois, giving us an impression of what Marilyn Monroe might have become, stands out.

Everything improves greatly in the second part – ironically as the steam runs out, and the pace slows. Now we have the psychological outcome of the murders, the realisation of how dangerous Bruno is and Haine’s descent into instability. Fox and Huston have the chance to show themselves as fine actors, the tension is higher and the finale surprising.

Throughout, the show looks stunning. The revolving design from Tim Goodchild is worked for all it’s worth and the impressive number of sets is remarkable. A monochrome palette is deployed, with superb costumes from Dona Granata, making the show lavish. It would have been great if the suspense matched the style. But Highsmith’s ideas and the sheer power of her storytelling go a long way and Warner has done well to bring so much of this forward.

Photo by Brinkhoff and Mogenburg

Written 21 November 2013 for The London Magazine