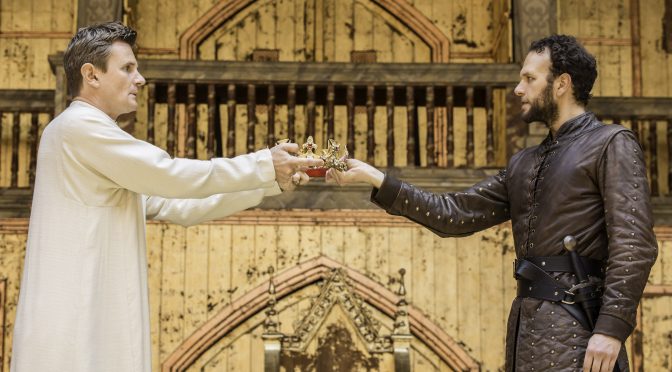 While The Merchant of Venice quote, handily emblazoned on tote bags in the Globe’s shop, tells us “all that glisters is not gold”, the theatre’s new production of Richard II is a solid 24-carat affair. Shakespeare’s deposed king is often presented as a star vehicle, but director Simon Godwin provides a carefully crafted ensemble piece that gives every character their due and is all the better for doing so.

Which is not to say that Charles Edwards isn’t magnificent in the title role. Against the golden backdrop of Paul Wills’ set and accompanied by Stephen Warbeck’s impressive score for trombones, Edwards strikes a suave figure. But it doesn’t take long to see a delusional aspect to this infantile King, set up by a prologue scene of his childhood coronation. In an admirably understated performance, especially during his imprisonment, Edwards shows this hollow crown is unhinged and tarnished by religious fervour.

The impact Richard’s divine right to rule has on society is highlighted by the luckless Aumerle, a role that Graham Butler gets a great deal from. One of Richard’s “caterpillar” sycophants, then betrayers, like his ruler, he seems strangely juvenile. One reservation: in this serious show, Godwin introduces humour into the scene of Aumerle’s treachery. While the text suggests jokes and the piece allows William Chubb and Sarah Woodward to shine as the Yorks, surely going all out for laughs is a misfire.

Much better are the muddled motivations of Richard’s courtiers. Godwin creates a sense of unprecedented events unfolding – with Chubb, again excellent, as a conflicted Regent and a superbly sinister Northumberland played by Jonny Glynn. Even the gardening scene, which I always think should be pruned, is handled well, using the audience in the complicit manner that directors at the Globe can seldom resist.

Godwin’s usurping Bolingbroke is a relatively complex figure, suggesting that events might have overtaken a once loyal subject. David Sturzaker gives a sterling performance in this strangely opaque role; a virile presence, we see the politician but also an emotional intensity that adds a layer to a play so much about surface presentation. Underlying the production’s traditional feel and gorgeous look is a satisfyingly intelligent assessment of the play’s themes. 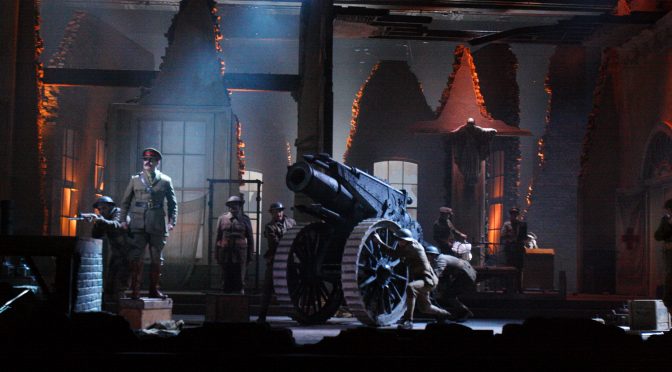 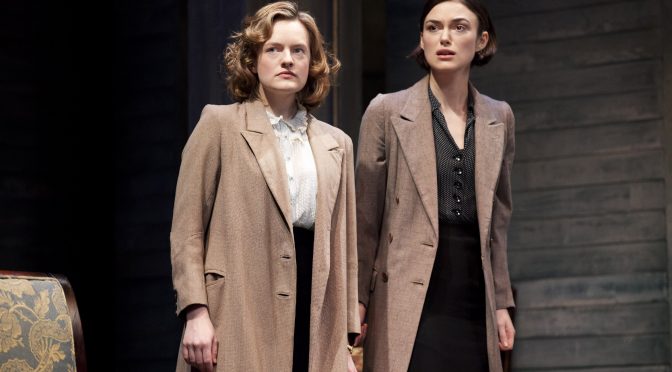 At the interval of The Children’s Hour, I happened to overhear a young audience member’s confusion. “What is the scandal?” he asked. “Is it because they are lesbians?” It could be that accusing schoolteachers of being gay, the central plot of the play, is now so outmoded it doesn’t even make sense, or that the child is just expecting something more lurid. Either way the perplexity doesn’t bode well – and yet The Children’s Hour works and proves to be a terrific night out.

It is easy to guess why director Ian Rickson took the risk – The Children’s Hour  has great roles for women. And the stellar cast should all share top billing. Elisabeth Moss makes an assured West End debut playing one of the accused teachers, Martha, with convincing aggression. She looks only slightly less comfortable on stage than her colleague Karen, played by Keira Knightley. After her modest debut in last year’s The Misanthrope, Knightly is impressive, playing an ambitious woman whose life falls apart in the face of malicious gossip. At times, she is a commanding presence on the stage.

The legendary Ellen Burstyn gives a performance of quiet brilliance as the teacher’s self-righteous scourge; it’s her desperation to do ‘good’ that persuades her to believe her granddaughter Mary’s story, cribbed from a book the girls have been passing amongst themselves. Mary has overheard the women visiting each other’s rooms and seen things she can only whisper about, blackmailing others to follow her. It isn’t that the story is convincing – it’s the paranoia of the adults that gives it power. Bryony Hannah plays this “dark child” wonderfully. As an actress she has had plenty of practice playing adolescents, and it’s paid off with an uncannily convincing performance of thrilling intensity.

Hannah’s performance is very much in keeping with Rickson’s strategy for The Children’s Hour. His direction wrenches every bit of tension from the text and he is aided by Mark Thompson’s austere set design and music from Stephen Warbeck. Lancet, New England, is a frigid place – probably close to Salem I’d guess – and Hellman, like her close contemporary Arthur Miller, is very much concerned with witch hunts.

While The Children’s Hour is an unsettling portrayal of how a sexual minority was treated in 1930s America, gay rights are really just a foil for larger concerns about the dangers of righteousness. In opening up her play to this larger issue, Hellman guaranteed its relevance for the future. Rickson and his cast get the benefits of good old-fashioned writing along with a foresight that makes this play carry considerable weight today.

Written 10 February 2011 for The London Magazine