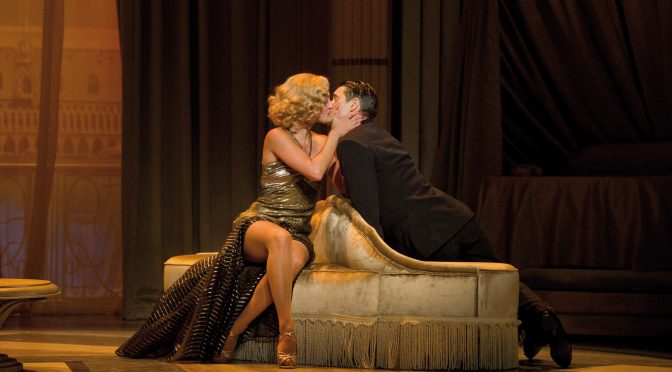 Few people love their jobs like the character Jerry Travers in Top Hat. A Broadway star who can’t stop performing, on stage or off, he is lucky enough to check into the Hotel Excelsior, where the staff start dancing at a moment’s notice and where he meets the love of his life. Fortunately, she likes dancing too. It’s hard not to enjoy this enthusiastic adaptation of the classic film, famous for Irving Berlin’s songs and the performances of Fred Astaire and Ginger Rogers. It’s great fun, with a plot so daft it takes us back to the farces the Aldwych Theatre is famous for.

In the lead role Tom Chambers, of Strictly Come Dancing fame, deserves credit for propelling the show and showing off his skills. He’s slightly upstaged by his love interest, played by Summer Strallen: not just because of her gorgeous dresses but also, as a line cribbed from Ginger points out, because she does everything Chambers does “backwards and in heels”. Strallen has the legs for a role like this, has clearly been practising her back bends, and with her sweet voice gives a heavenly performance. Together, Strallen and Chambers make a likeable couple and are convincingly glamorous in Hildegard Bechtler’s stylish set. Their courtship by tap dance is delightful and the big numbers such as ‘Cheek to Cheek’ are real crowd-pleasers.

Director Matthew White makes the most of the gentle comedy on offer from the secondary players. Martin Bell plays a theatre producer and Vivien Parry his wife with a comic panache that’s remarkable given the age and standard of the jokes they have to deliver. Stephen Boswell is superb as their butler Bates and Ricardo Alfonso gives a tremendous performance with actually quite a weak number. A lot of the show’s undoubted success comes from sheer momentum – it’s relentlessly upbeat and determined to entertain, and hardly anyone stops smiling the whole way through. Including the audience.