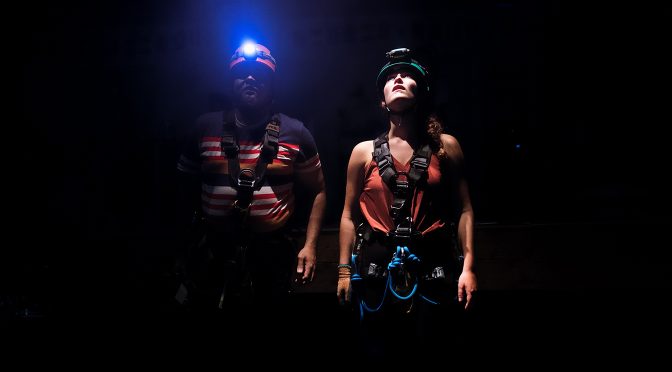 It’s easy to appreciate that theatre company curious directive’s show is the most technically ambitious staged at this super venue. The New Diorama is tiny and what Zoë Hurwitz’s set achieves is remarkable. Regrettably, for all director Jack Lowe’s efforts at making sure the show actually works, the piece itself achieves little.

Abseiling actors are just the start. With performers above and below a stage full of surprises, as well as projections and headphones to hear the show through, we are taken backwards and forwards through time. The story follows one woman, Elise, at different stages of life and takes us exploring in an Indonesian cave full of prehistoric symbols.

Lowe manages this time travelling well. A clear performance from Stephanie Street anchors the show and there is a particularly challenging role for a child (well done to Asha Sylvestre at the performance I attended). That the personal relations in Elise’s life are slim is a relatively small problem.

What Deciphering does with its ambition – its scope as well as execution – is disappointing. There’s an exploration of creativity and communication (in a classroom as well as a cave). But the thinking is woolly. On top of this, an investigation into time shows us different paths Elise could have taken in life. The ambition to visualize time on stage is impressive. But we end up with Sarita Gabony (our third Elise) dropping down on a rope and asking us what we want to be when we grow up. Identity seems to be all about your job as Elise suggests that instead of being a paleo-archaeologist, different “versions” of herself could be all manner of equally interesting and prestigious professions. Isn’t she lucky.

A very earnest young teacher, which Lewis Mackinnon can do little with but play, well…earnestly, and an irritable academic (great work from Amanda Hadingue) are the professionals who shape Elise’s life. But both characters are forced too close to cliché as they have to help or hinder Elise. There’s a strong sense of wonder when it comes to the symbols in the cave, which I suspect was the inspiration for the show: with Hurwitz’s help, the scene is a highlight. But Deciphering descends into platitudes. The show desperately wants to be profound. Forcing in personal growth for Elise, we conclude with the weak advice that “if you are brave you cannot fail”. I beg to differ. 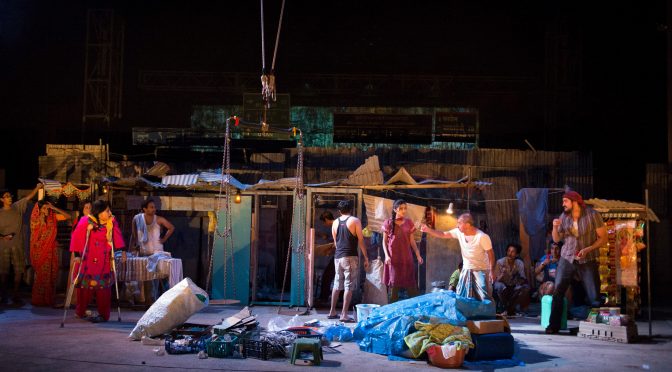