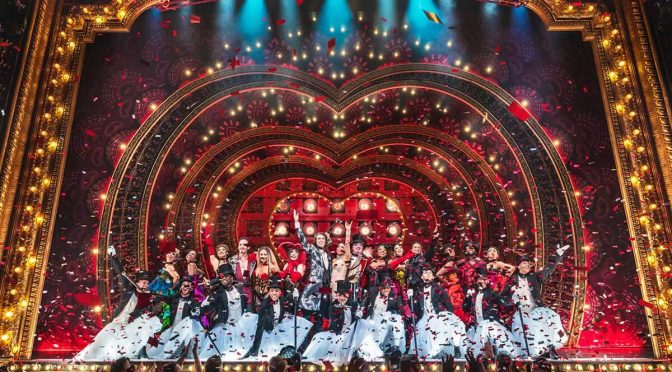 This theatrical version of Baz Luhrmann’s 2001 movie musical arrived in London with considerable hype (and ten Tony Awards) at the start of this year and is clearly set to be a profitable West End fixture.

The escapist love story between cabaret courtesan Satine and singer-songwriter Christian has appeal. The book by John Logan may be thin, but it is well crafted – the device of a show-within-a-show is as safe as they come but it is used superbly. And you can literally see what’s drawing in the crowds – the production is as sumptuous as it is entertaining. With wonderful costumes by Catherine Zuber and stunning lighting design from Justin Townsend, Moulin Rouge! looks great. And it sounds, well, it sounds OK.

Luhrmann’s mashed-up soundtrack, taking snatches of songs from very different artists, was innovative and influential at the time. The music supervisor and orchestrator for the show (who has also provided additional lyrics) is Justin Levine and his work is accomplished. But, somehow, the music doesn’t excite as it should. Maybe it just lacks the element of surprise? The new songs utilised are a touch predictable. Or maybe, director Alex Timbers mistakes the wit for humour too often. The technique isn’t just a joke – it’s supposed to reflect Christian’s creativity and is used in serious scenes. Yet too often it becomes a game for the audience… remember the TV show Name That Tune? Frankly, the whole thing is done a little bit better in a much lower key show, &Juliet. Even worse, and more puzzling, the sound itself is underwhelming – and I seldom say that a show isn’t loud enough.

These disappointments are not the fault of the performers (although some of the singing could be tighter). But nearly all the characters have too little to do. The villain and Christian’s friends are woefully one-dimensional: Simon Bailey and Elia Lo Tauro end up wooden as a result. Jason Pennycooke’s Toulouse-Lautrec is better but hampered by a cod French accent. Clive Carter, as the owner of the cabaret, has clearly been directed to give his best impersonation of Jim Broadbent in the film. Carter can whip up a crowd, so it’s shame he isn’t given more freedom. And the character is a car crash – tarts with hearts is one thing but sympathy for the pimp?

The result of poor characters means the show rests on the leads, which isn’t unusual or necessarily a problem but often feels weak or lazy. Thankfully, these leads are good. Liisi LaFontaine uses her powerful voice to the max and really pleases the crowd. Honestly, the consumptive Satine is a bit of a bore, but LaFontaine makes her charisma believable. Jamie Bogyo has the better role as Christian and he can belt out a tune, too. There are moments of pathos as Bogyo sings that show that the musical mash-up can bring about drama as well as comedy. These moments shine, but leave the impression that the source material has been short changed. For once, the film is better than the stage. That’s not something to celebrate.