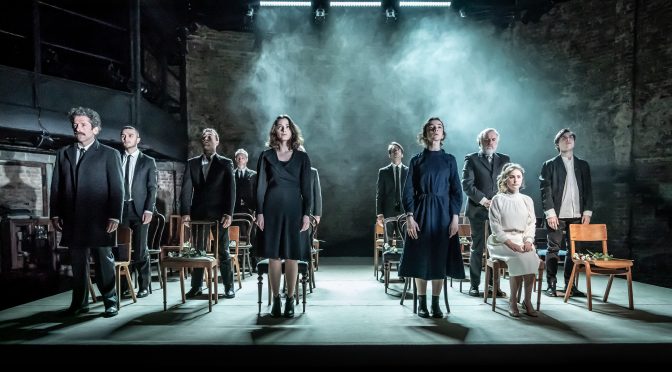 Cordelia Lynn’s new version of Chekhov’s masterpiece is bold and fresh to the point of being revelatory. Lynn enforces the play’s bleakness, with plenty of espousals that life is pointless, yet presents us with a perky trio who are approachable, recognisable and funny. There’s no shying away from the fact that Chekhov’s heroines have an air of the elite; you might ask them to check their privilege. But Lynn makes the struggles of each – in love and work, with the health of all three suffering – relatable, thought-provoking and moving.

Taking the three iconic sisters way past stereotype is not an easy task. Lynn’s muscular dialogue is well served by three performers who are excellent; it’s pleasingly impossible to single out either Pearl Chanda, Patsy Ferran or Ria Zmitrowicz, who all work well together. It’s fantastic to see how funny each can be in each character’s own particular way. Note the difference with the role of their sister-in-law, vividly portrayed Lois Chamimba, which comes into focus wonderfully: she’s a character we laugh at rather than with. Lynn has done justice to the play’s male characters, too. Her version retains some dignity for Elliot Levey’s cuckolded teacher, has sympathy (more than I) for the sister’s brother that Freddie Meredith does well with and uses Alan Williams’ Doctor to further focus themes. The role of Irena’s suitor is the big surprise, though; the character’s optimism comes to the fore as a foil… for a while. It’s a bonanza for Shubham Saraf, who takes the part.

With superb performances and an exciting text, reservations risk sounding trivial, as they become matters of taste rather than criticism. The usually excellent designer Hildegard Bechtler has left the show looking a touch too modish. While not specifically updated or relocated, these three sisters are out of time and place, no matter how often Moscow is mentioned so all the mismatched chairs and Anglepoise lamps, along with the final scene played on bare ground (a big effort for little result), make the aesthetic too contemporary. And might director Rebecca Frecknall’s work also be a touch heavy handed? It’s easy to see the temptation. Several scenes are “all a bit strange”, with moments of staccato delivery and portentousness. Maybe Lynn, like the character Masha, is impatient with the “talk talk talk” in the play – she brings out ideas with sometimes blunt directness. Perhaps Frecknall should have tried to inject more subtlety? Alternatively, she reflects Lynn’s forcefulness and does justice to her vision. It’s a fine line that makes for a pleasing debate.