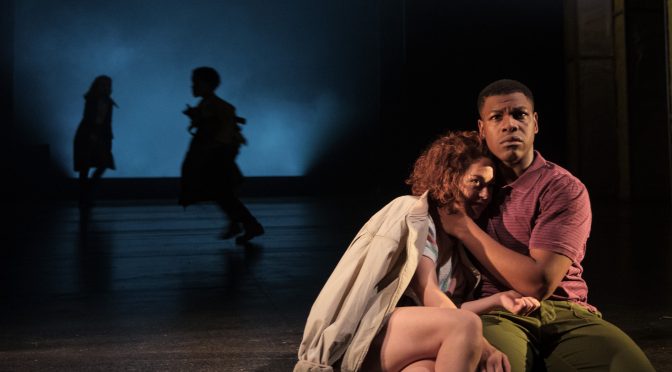 John Boyega is the young actor who impressed everyone in the reboot of the Star Wars franchise. Bringing him a further credibility it’s questionable he needs, this stage foray is a serious affair, with lots of forehead slapping, that shows he can handle angst with ease. In the title role as a soldier suffering a nervous breakdown, Boyega establishes sympathy for his character commendably. As his health deteriorates, the magnetism increases – it’s tough stuff to watch but gripping, too.

Boyega is star material, but the revelation of the night is young director Joe Murphy. It’s top man Matthew Warchus’ idea to give him the title of Baylis Director, offering emerging talent ‘main stage’ shows. And it’s an opportunity Murphy has embraced. Woyzeck can work well in any space, but the cavernous stage of the Old Vic is used to emphasise a lost, lonely, quality. Tom Scutt’s brilliant design has panels that suggest both walls and beds – sliding in and out, up and down – brilliantly lit by Neil Austin.

Jack Thorne has updated George Büchner’s unfinished play from the German provinces of the 19th century to Berlin at the end of Cold War, with Woyzeck traumatised by action seen in Northern Ireland. The move makes the play approachable but better still are changes to Woyzeck’s unfortunate love, Marie, played by Sarah Greene. More than a foil to her troubled partner, Greene’s modern sensibility makes the play’s domestic violence potent. Along with the addition of a plot about a medical trial Woyzeck participates in to raise cash, the play’s first half feels like a thriller.

Unfortunately the tension falters. As the play becomes ‘madder’ it feels too drawn out. The staging remains impressive but secondary characters, seen through Woyzeck’s eyes and affected by his increasing paranoia, become tiresome rather than threatening. The roles of Woyzeck’s Captain and his comrade, Andrews, are well performed and funny – but thinly written. It’s a great show for Nancy Carrol, playing the Captain’s wife and transforming in flashbacks into Woyzeck’s mother, but her posh cow character shows the problem best – an interest in the army’s class structure feels forced. Woyzeck becomes a victim in search of an excuse. Exploited by all and trapped by his past, causes are crammed in rather than explored.