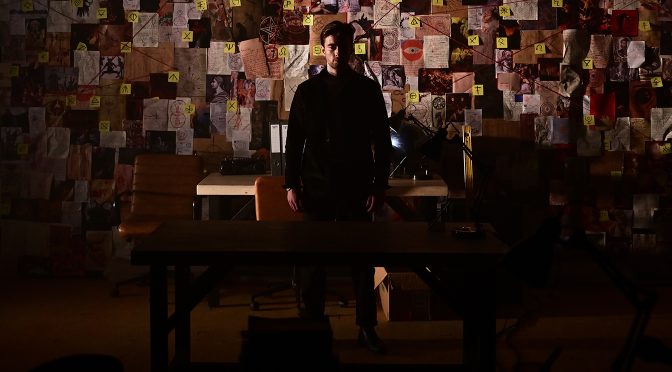 Christopher Marlowe’s play is always a fiendish one to stage – with ‘Enter Devils’ as a stage direction, how could it not be? But this new updated production is excellent and confirms that shows from Lazarus Theatre are must-sees.

There may be rough moments and the show is, literally, messy. But, alongside plenty of blood and a paper-strewn stage, the direction and adaptation by Ricky Dukes is as neat and tidy as you could wish. A hugely impressive number of ideas push the play to its limits and preserve it at the same time.

Dukes exploits the theatricality of Marlowe’s text – this is a show full of shows. Faustus learns about space in a brilliant scene that mimics a modern Planetarium display. The famous encounter with the Seven Deadly Sins takes on the air of a burlesque. Oh, and the Pope dances the hokey cokey.

It’s all a bit mad and there’s a surprising amount of humour. The spirits that are conjured up have some singularly effective make-up around their mouths (take note of when it appears) and come and go with a curtain reveal. Even the blood Faustus signs his name with is fake, and no attempt is made to hide that. Which raises the question – does Faustus really get what he has traded his soul for?

That Faustus might be cheated of his wishes is frightening. Is it all just in his head? And that isn’t the only scary thing about the production (that make-up again!). With some fantastic sound and lighting design (bravo, Stuart Glover and Sam Glossop) as the clock ticks down to the devil claiming his bounty, there is considerable tension. The final scene left me, as well as Faustus, gasping.

“Faustus must be damned”

A lot of the production’s success is down to taking the play’s religiosity seriously (no mean feat, nowadays). Faustus’ denial of God, his refusal to repent despite repeated opportunities, builds magnificently. We have a battle of minds and ego that is used to structure the show. And Dukes puts proper emphasis on what really damns the man – his despair.

All this praise and no word yet on a strong cast… sorry about that. Dukes makes this an ensemble show, with the performers mostly playing a variety of small roles and allegorical figures. If Candis Butler Jones stands out as Lucifer, well, the devil always has the best lines. Hamish Somers and Rachel Kelly also impress as particularly hard working: their appearances as Good and Evil Angels is an essential part of providing a framework for the adaptation.

The shows leads are fantastic. David Angland takes the part of Mephistopheles with a fastidiousness that adds chills. There’s a wicked sense of humour and careful reminders of what’s at stake. As Faustus’ sprit servant, he’s never too familiar – Angland shows an effective contempt for the Doctor. But, of course, it’s Faustus’ show and, taking the lead, Jamie O’Neill could be forgiven for the sin of pride.

O’Neill doesn’t leave the stage during the entire 90 minutes. While managing to convey plenty of awe, as well as passion and fear, this is a remarkably restrained performance. Every movement is measured, and Faustus seldom acts without thinking. And that’s important – Faustus is an intellectual and this is a cerebral play. That this aloof doctor can also connect to the audience and show increasing desperation is a fantastic achievement, making O’Neill heavenly casting for an out-of- this-world show. 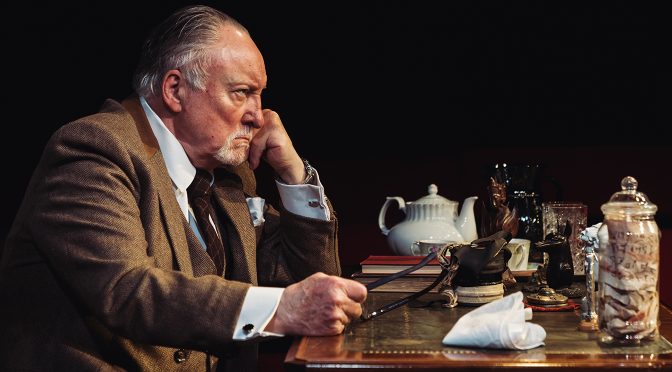