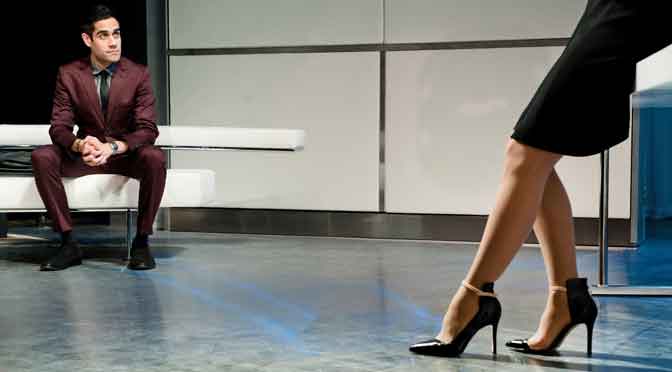 The name of Lucy Kirkwood’s new play for the Royal Court stands for ‘Not Safe For Work’. Set in the bitchy world of London media, it comes as no surprise that there’s little that’s safe in these particular offices. This sharp satire invites the theatre audience into an industry where employees will agree all too quickly to be humiliated, or compromise their private lives, in order to get ahead or simply stay in the job. To those who’ve never worked in magazine journalism it’s a delicious parody full of laughs; for those who have, it’s painfully close to the bone.

Kirkwood’s play has the benefit of skilful direction from Simon Godwin and superb performances. The magazine editor characters have something of the stereotype about them, but this potential problem is dealt with nimbly, thanks to sharp dialogue that means the play never strays into lazy parody. Julian Barratt and Janie Dee both excel as the “troglodyte” editor of a men’s magazine and the self-confessed “Menopausal old hag” who works for an over-sharing womens title, respectively. The younger characters, desperate for work and predictably overqualified, are wonderfully drawn: Henry Lloyd-Hughes gives a great comic turn as the trustafarian drawn to journalism, Esther Smith expertly judges her role as a young feminist so ashamed of her job she tells people she’s an estate agent, and Sacha Dhawan gives a performance of great charm as an idealist who finds that, in this job, he can’t avoid getting his hands mucky.

Of course, nobody finds the media as interesting as the industry finds itself. Thankfully, Kirkwood’s play uses magazine culture to address broader social concerns. The presentation of women in the media, in particular, is handled in nuanced, thought-provoking style here. While the plight of the younger characters, with whom the play’s sympathies so firmly lie, gives a dark edge and subtlety and balances NSFW’s exquisite portrayal of the excesses of journalism.

Written 1 November 2012 for The London Magazine