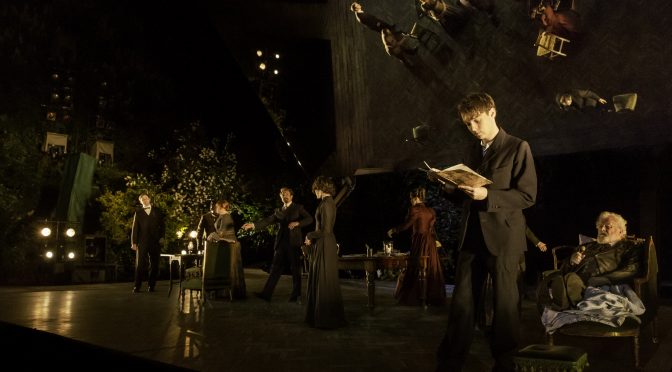 Given that The Seagull opens with its hero Konstantin putting on an outdoor performance, Regent’s Park feels a pretty good match for Chekhov’s play. The stunning venue is enhanced by Jon Bausor’s splendid design – a giant mirror hangs above the action, literally adding another dimension to reflect upon. Matthew Dunster’s production looks fantastic, but sadly there’s too much chasing after laughs so the play falls curiously flat.

The problem isn’t so much with Torben Betts’ new adaptation of the play – although the language is sometimes too direct, it can be good to shake up a classic. This version is easy to follow and feels modern. Rather, it’s Dunster’s emphasis on the comedy; he gets plenty of laughs but the humour doesn’t build and the play’s more poignant moments feel thrown away. Some characters suffer dreadfully: Medviedenko, the teacher, is reduced to a comedian with just one punch line, the ever-miserable Masha a wailing drunk and the young leads are simply too gauche. Matthew Tennyson and Sabrina Bartlett hold the stage as the aspiring artists Konstantin and Nina, and their naiveté gets laughs but both actors aren’t given a chance to delve deeper.

Other roles fare better. The writer Trigorin’s ego fascinates. Alex Robertson makes him funny and irritating – a petulant take on the character that’s interesting. And Janie Dee’s Arkadina manages to be at once jolly and roundly three-dimensional. Dunster is strongest with group scenes, highlighting uncomfortable dynamics as an “angel of the awkward silence” is said to descend. Also interesting are the two servants (Tom Greaves and Tara D’Arquian), who giggle at innuendo and silently respond to events.

The production also has the novel device of using a voiceover for character’s thoughts. It’s certainly startling but privileges certain players too much. Frustratingly, despite being inside their heads, we don’t feel any closer to them, and this internal dialogue is used indiscriminately and again mostly just for laughs. Nice try, but this showy device is symptomatic of a production that tries hard but doesn’t hit anything… apart from that poor seagull, of course.