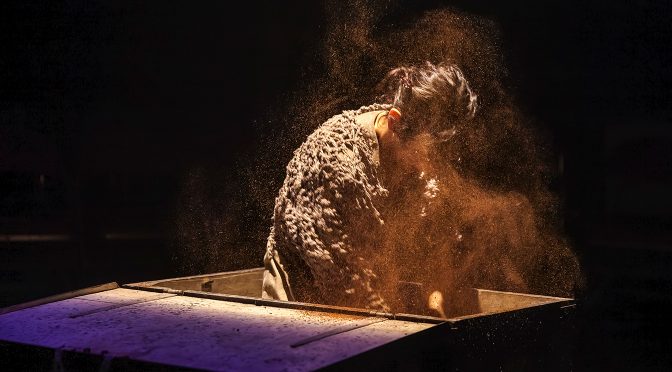 With magical sheep whose wool makes the rain and a trip to a king’s castle, playwright Sami Ibrahim blends elements of a fairy tale with a story of immigration. The mix is productive and, benefitting from a strong production directed by Yasmin Hafesji, deserves acclaim. Just don’t get too comfortable as you settle down for this yarn.

As the Gate Theatre’s first production in its new Camden home, Hafesji enhances the intimacy of the venue. Inside, the audience is very close to the in-the-round action so a snug sense of settling down to hear a story is cleverly fostered. With several trunks that contain surprise props, Ryan Dawson Laight’s design is great, providing an air of improvisation that adds dynamism.

But an excellent trio of actors as story tellers is the key to success here. Sara Hazemi takes the role of Elif, an illegal immigrant in a strange land, exploited but retaining dignity and independence. Princess Khumalo is her daughter (at various ages) as well as The Landowner (the least successfully written role) and is especially good at injecting some humour. Samuel Tracy plays, mostly, Elif’s suitor – a character who is, admirably, not simply her seducer. The characters are all brought to life well. The cast excels when it comes to creating the air of a story in progress – the actors bring a sense of urgency to a script that plays with timelessness.

The gravity of the story increases – after all, immigration isn’t a fairy tale. Elif’s attempts to shape narratives (past, present and future) are contradicted by other characters. There’s a sinking feeling around encounters with bureaucracy or attempts at betterment. And there are moments of frustration – including a long fantasia delivered impeccably by Hazemi- that have great energy. It isn’t Ibrahim’s fault that the play becomes predictable. Indeed, it adds weight to his argument. We expect fairy tales to have a happy ending. That this one doesn’t is a bold move.