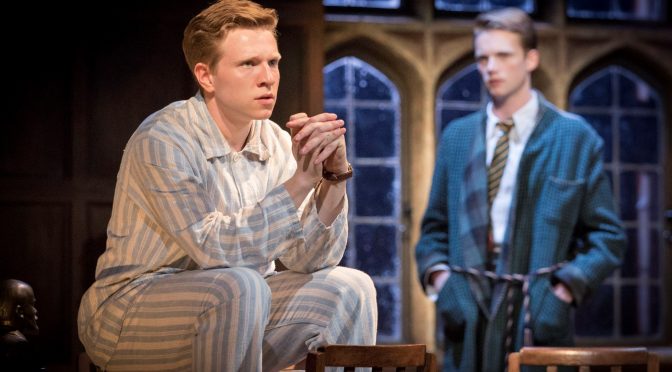 The Theatre Royal Bath and Chichester Festival Theatre’s revival of Julian Mitchell’s Another Country is now showing at the Trafalgar Studios. The 1981 play, which imagines the school days of a future spy, to all intents the real-life traitor Guy Burgess, is an accomplished text and this fluid production, directed by Jeremy Herrin, serves it well.

Set in a prestigious public school, the play begins with a pupil’s offstage suicide. This tragic death compels the lead character, Bennett, to confront his homosexuality and take comfort from his only friend, a schoolboy communist, Judd. It’s possible Herrin could have injected more tension by conveying just how much the political machination of the prefects matter to these youngsters. But Peter McKintosh’s set and, above all, the writing itself recreate the world of the school with conviction. Despite levels of repression that could strike you as clichéd, melodrama is avoided.

Rather than teenage angst we have an intelligent examination of class and community. Cold War politics seem a distant issue now, but there are plenty of arguments raised by these juvenile protagonists that make you stop and think. The youngsters here are far removed from those we know today, being by turn strangely naïve and remarkably articulate, but the deep passions that arise in youth and their impact later on in life remain compelling themes.

To consider another kind of legacy: the play has always been a springboard for acting talent. The cast is well drilled and highly professional. Rowan Polonski makes a superb Fowler, a youth brimming with religious fervour, and Mark Quartley convinces as the stressed head of house Barclay. As Bennett, Rob Callender is sure to be compared to Rupert Everett, who performed the role in the 1984 film. But what Callender lacks in terms of instant charisma he makes up for in terms of credibility as a gawky schoolboy – Everett never appeared this gauche – and his is a better interpretation of the role. As Bennett’s communist comrade Judd, acting scion Will Attenborough gives a tremendous performance, managing to inject passion into the polemic and demanding we sit up and listen to every word he says.

Written 27 April 2014 for The London Magazine