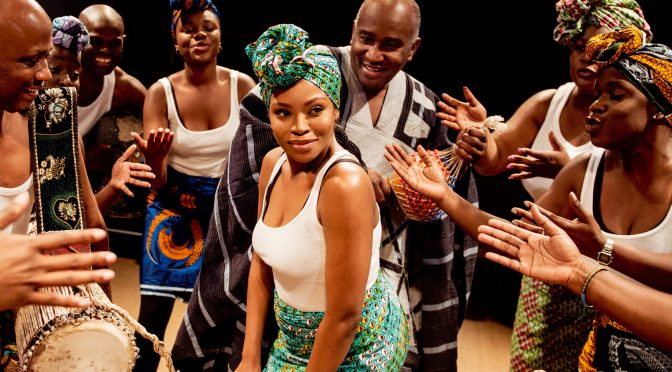 This theatrical trip to Nigeria, via Dalston, comes courtesy of Rotimi Babatunde’s adaptation of Lola Shoneyin’s prize-winning novel. It’s the story of Bolanle, played with precision by Marcy Dolapo Oni, who becomes the titular patriarch’s fourth spouse and inadvertently exposes a conspiracy that has shaped many lives. The story is dramatic but proves surprisingly funny, with a frank sense of humour that makes the show stand out.

Bolale’s “fellow inmates” in Baba Segei’s house are a terrific – in many senses of the word – trio. Taking seniority, there’s an unforgettable performance from Jumoké Fashola as the formidable first wife. Joined by Christine Oshunniyi and Layo-Christina Akinlude, all three define their characters with clarity and make the most of powerful monologues that deserve close study. Doubling roles, they join an ensemble that spoils the audience for talent, including a scene-stealing performance from Diana Yekinni.

Not only do the performers transport us to a very different world – they also sound great. As well as driving the plot with forceful direction, Femi Elufowoju Jr is the production’s musical director, and he infuses the show with sound. I’ve no knowledge of African music but it’s wonderful to hear emotion on stage mirrored with such dramatic efficacy.

But what of Baba Segi himself? The play revolves around him and provides a tremendous role for the appropriately charismatic Patrice Naiambana. A polygamist who is offered wives by desperate families and who values women on whether or not they can provide him with children is not instantly appealing. Using the audience’s incredulity about the character’s ignorance gets some great laughs. And the way he is manipulated by women becomes a source of satisfaction. In my own ignorance of African theatre, one reference point is Restoration Comedy – this show is every bit as funny as the best of them. But there is a more serious approach to character here and, underneath the jokes at his expense, Naiambana still makes you care for the man. As Bolanle says, you may not miss Baba Segi himself when you leave, but you won’t forget him and you will remember this play with fondness.