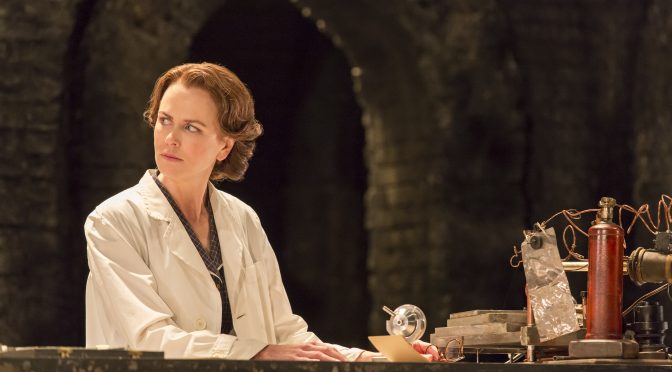 The promise of a film star who is just as good on stage is fulfilled in Anna Zeigler’s new play. A-lister Nicole Kidman takes the role of scientist Rosalind Franklin, who made a vital contribution to the discovery of DNA, and she doesn’t disappoint (just as she delighted critics with her first famous foray into London theatre in 1998). In this play, more about sexism than science, the characters remember the actor but not the actress in a production they attend – no one could make such an oversight here.

Kidman commands the stage, her performance as controlled as Franklin’s character and is brave enough not to try to make us like this frosty, determined woman. There are just enough perfectly placed glimpses to show a sensitive side. Equally impressively, Kidman works impeccably with fellow performers. Director Michael Grandage’s male casting is another achievement. Stephen Campbell Moore, Will Attenborough, Edward Bennett and Patrick Kennedy excel as a quartet of scientists Franklin has to deal with, while Joshua Silver is an amiable PhD student who serves as a narrator.

Ziegler writes with ample characterisation and good dialogue. While period detail about post-war London feels sketchy, the male hostility experienced by our heroine generates outrage that makes the play fizz. Unfortunately Photograph 51 is not exactly gripping. We’ve all seen science on stage done better by Frayn, Payne and most recently Tom Morton-Smith. And yet Grandage and Kidman do a remarkable job of spicing things up, the pace is terrific and Christopher Oram’s startling design, evoking London’s ruined King’s College, uses a light-box-style floor to great effect.

One problem is that attempts to reflect the excitement of discovery are contrasted by Franklin’s methodical behaviour. And the focus is so much on how she was treated that her scientific achievements get lost. Conspiracies against Franklin, with an eye to historical accuracy, have to be muted: Crick and Watson, who ‘won’ the DNA race are “a couple of old rogues” rather than anything more sinister. Franklin is a victim of everyday sexism, which is annoying but not the stuff of high-octane drama. I’m somewhat ashamed to have never heard of Franklin, which is much of the play’s point. It’s good to have my ignorance corrected, but the lesson is more admirable than enjoyable.