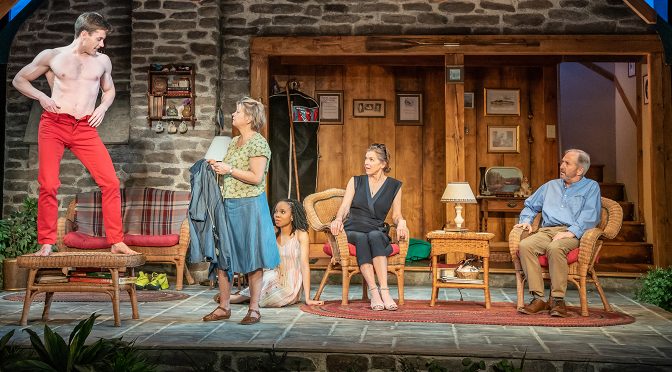 Christopher Durang’s award-winning comedy is a Chekhov mashup that regular theatregoers should lap up. Full of clever references that are witty and sometimes silly. Durang’s admiration for his playwriting predecessor is endearing. But the question arises – will you enjoy the play without knowing your Russian classics?

I think the answer is yes. Without pretending I got all the allusions, Vanya and Sonia and Masha and Spike is an effective family drama with plenty of laughs.

A trio of siblings (get it) bicker while strangers (yes, one wants to be an actress) challenge their routine. Masha is a successful actress and supports Vanya and Sonia financially, but the latter are frustrated by their comfortable rural existence. Masha has troubles, too – her toy-boy version of Trigorin (a good spin) is an indication of her angst.

Durang is justly confident that the closed environment and close observations of human nature will work – and he’s good with them. Sometimes it’s the more modern additions – jokes about Hollywood and a rant against social media – that jar more than the Chekhov. Preparation for a costume party feels a little like an extended sketch – but this highlight scene is excellent.

Best of all are Durang’s characters and the performances, impeccably directed by Walter Bobbie. The “monstrous” Masha is meat and drink to Janie Dee – she is simply marvellous. Michael Maloney and Rebecca Lacey, as the siblings pining for another life, have impressively moving moments in controlled performances. And Lacey’s impression of Maggie Smith is worth the price of a ticket alone.

There’s a strong debut from Lukwesa Mwamba as the star-struck ingénue. And Sara Powell’s eccentric cleaning lady is a fantastic creation (note how her predictions change from being doom and gloom). Charlie Maher’s Spike – attractive “except for his personality” – made me laugh the most, but pick your own favourite.

Durang may not wear his learning lightly, but he is a strong enough writer not to lose his identity. There are bitter touches, yet the quirky humour is gentle and distinct from Chekhov. We’re allowed to like everyone and laugh at them. Watching the family get closer, and starting to hope, proves heart-warming. And we’re even given a happy ending.