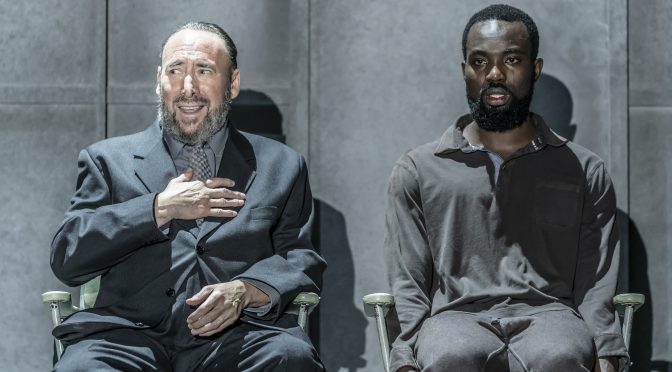 Director Jamie Lloyd has an unerring ability to surround his projects with excitement. His latest scheme is to present short works by Harold Pinter in a six-month-long series of carefully curated and stylishly packaged shows (they really should sell a T-shirt). The project boasts an array of stars – young and old – which indicates that everyone wants to work with Lloyd and offers the chance to see rarely performed works.

The season – and Pinter 1 – get off to a bang courtesy of confetti cannons and Press Conference, which stars a commanding Jonjo O’Neill as a sinister politician. It sets the scene for a first half of plays that show a variety of dystopias. Sometimes the shorts come across as dated, too simplistic and full of conspiracy. Or should we see the paranoia as prescient? A Donald Trump impersonation in The Pres and an Officer, a newly discovered satirical skit, suggests Lloyd does.

The way Pinter encapsulates the most basic fears surrounding the breakdown of society makes them raw and moving. Mountain Language reduced me to tears, with Maggie Steed as an elderly mother confronting her tortured son and forbidden to speak to him. And the tension Pinter can create becomes almost unbearable with One for the Road, which stars Antony Sher as a truly chilling interrogator, alongside Paapa Essiedu and Kate O’Flynn as his victims. The paranoia moves into a domestic setting for the evening’s finale, Ashes to Ashes, which sees a couple recounting an affair and an atrocity, both products of a deranged mind. It’s a too puzzling piece, held together by the direction of Lia Williams and passionate performances from O’Flynn and Essiedu.

Pinter 2 is a double bill of plays that look at infidelity, both from the 1960. First up is The Lover, where a squeaky clean couple discuss their affairs over breakfast and perform a bizarre role play. Surely this once appeared more challenging than it does today, and the point seems overplayed – even at just under an hour, the play drags. The boredom isn’t Lloyd’s fault – his direction is snappy and the whole show stylish thanks to the saturated colours of Soutra Gilmour’s designs. But while the piece is a comedy, the absurd is emphasised to a fault. Hayley Squires and John Macmillan perform well, but their characters are flattened, reduced to puppets. In fact, their shadows catch the eye more than they do (Elliot Griggs’ lighting design is superb).

This second evening improves a little with The Collection, where Squires and Macmillan benefit from meatier, if shorter, roles taking on another suspected affair and a confrontation between the husband and the man his wife says seduced her. Russell Tovey plays a wide boy who taunts the cuckolded Macmillan while his flatmate, David Suchet, looks on. Lloyd employs a broad brush again, and the cast clearly has fun, but a degree of tension is retained. The older man and his younger counterpart, from the slums it is said, make for a disconcerting mix of sex, class and violence that’s the real deal. 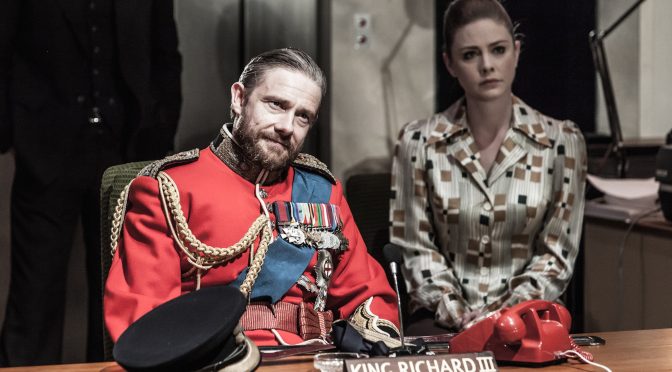 Jamie Lloyd has all the bases covered with his new production of Richard III. After an acclaimed first season at the ‘transformed’ Trafalgar Studios, theatregoers are excited and bringing another star to the stage attracts a new crowd. Taking on Richard is Martin Freeman, of Hobbit and Sherlock fame, giving an assured performance within a show full of eye-catching touches.

Lloyd would, I am sure, be proud to be called populist. This Richard III is remarkable for its clarity. Helpful gestures ensure those pesky family trees, important to claiming the disputed throne, are clear. Staged as a Cold War thriller, set among military coups in the 1970s, there’s a cinematic air that aids the plot and adds a contemporary feel.

Also, there’s plenty of action. It’s often commented that the killing in Richard III takes place off stage. Lloyd is having none of this: Richard brutally murders Anne before our eyes and the blood flows freely – if not quite enough to justify the pre-show hype around being splattered if you are in the front rows.

Angling the play as a spy story and all the gore make the show feel fresh and enable Lloyd’s interpretation. I wonder if anyone else feels they have seen too much filming and recording on stage by now? Nonetheless, a sense of paranoia is efficiently created. Seated in a war room, playing with toy soldiers, this is a modern military world familiar from recent Shakespearean productions. It’s a shame that Richard’s famous line about his horse is thrown away but, if not revelatory, Lloyd is on sound enough ground.

Freeman’s Richard is a serious fellow, as it’s the politics and the twisted practicalities of power that are emphasised. There are laughs, but quite a few are sacrificed to the speed of delivery and that bloodthirsty touch. The acting is consistent and intelligent, with touches of charisma and addresses to the audience that will please fans.

It is the thoroughness that makes you admire Lloyd. This is a strong supporting cast – especially of women. Maggie Steed gives a bold performance as an increasingly bizarre Queen Margaret, calmly sipping tea as prophecies of doom are fulfilled. Gina McKee, too talented an actress for the relatively small role of Queen Elizabeth, is outstanding – bringing home the emotional impact of Richard’s tyranny. Jo Stone-Fewings is also superb as Buckingham, Richard’s “other self”, presenting the crown as if won at a game show.

Final praise to Ben and Max Ringham for their sound and music. With a microphone frequently used to emphasise public announcements, sound indicating changes of scene and music that makes the atmosphere gripping, the Ringhams’ work is a good example of how detailed and committed this show is.