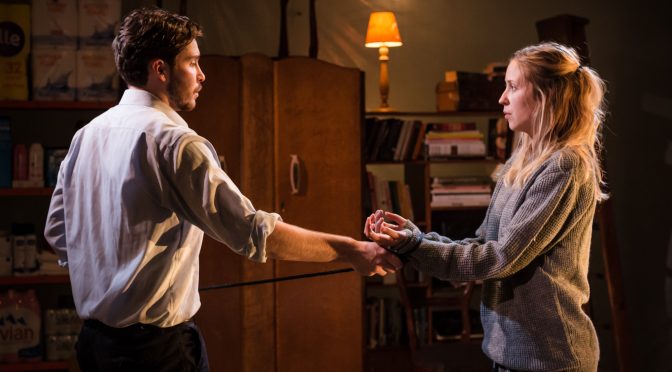 It’s unfortunate for Mark Healy, the adapter of John Fowles’ gripping novel, that this reviewer, on top of his homework, is so fresh from reading the book. The story, of a lottery winner who kidnaps an art student he is long obsessed with, is still great and the acting here is strong, but while all the mechanics are present and correct the magic is missing.

A tough job for sure, the novel consists of long diaries, from both parties, showing different sides of the same event. Healy mashes the two together so the play is more conventional. It’s clear what’s going on and it’s a tense affair but a lack of ambition makes the characters flatter and the show is slowed by some fussy touches from director Joe Hufton and an incongruously cluttered set.

The plot is still strong enough to grip and leading man Daniel Portman has a star role to boast about. Not exactly well cast (that’s a compliment) he embodies the kidnapper Frederick’s peculiarities perfectly. There are moments of sexual repression here but that’s not Fowles’ focus and Portman constructs a boundary around these, showing us the “gentle force” he uses, which is much more frightening. We’re kept guessing about the depths of his insanity. Portman’s nuanced depiction drives the show.

His victim, played by Lily Loveless, suffers more from the inevitable editing but still presents a well-rounded character and is great in more emotional scenes. Awkward moments aren’t of Loveless’ making. Abandoning the original early 60s setting, there’s an iPhone and Fowles’ musical references are ignored, an obsession with class becomes jarring: inconsistent, incoherent and frankly odd. It’s as if Frederick has kidnapped a hipster and never had access to the Internet – we know he’s mad but both character’s here are adrift in time. The clash of cultures that should provide most of the motivation is lost. If Healy wanted to update, fair enough, but a more radical approach would have been necessary.