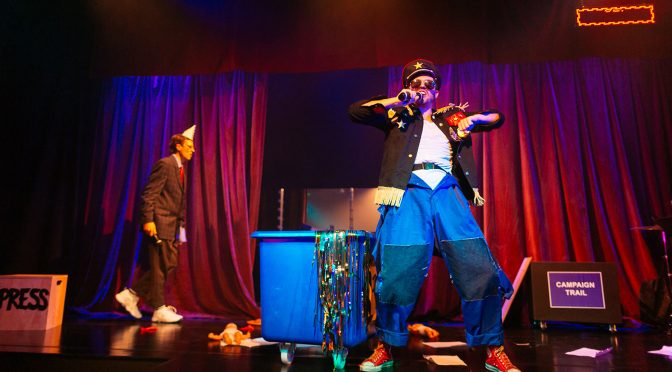 It’s not uncommon for a night at the theatre to combine comedy and tragedy. But Rhum + Clay’s new show moves from laughs to trauma particularly well. So well, it makes Project Dictator difficult to write about. This is one of those shows that knowing too much about might spoil.

Co-directors and performers Julian Spooner and Matt Wells take their audience on a theatrical journey full of smart surprises. Assisted with direction by Hamish MacDougall, and joined onstage by composer and musician Khaled Kurbeh, Project Dictator has lot to say and plenty of ideas. The show is well executed throughout.

So, what’s going on? We start with a serious play within the play…but performed as a farce. An earnest writer and performer, Jeremy, is an appealing character. There’s the kind of observation – and panegyric to democracy – we expect. Gently mocking, not least artists like themselves, Spooner and Wells show strong comedy skills. A little slapstick goes a long way.

There are more laughs as Jeremy’s single cast member, a supernumerary who finds his voice, takes over. With a power struggle onstage, and calling on the crowd, we get the dictator the title promises. There’s a lot of audience participation here – be prepared to read out loud, dance in your seat and even draw. Jeremy shares my feelings about a fourth wall, and I can’t say I enjoyed all this. But, unlike a lot of audience participation, it is very well done and has a point.

This dictator wants more fun…but very deliberately the show doesn’t become funnier. At what point do you notice a sinister edge? The satire becomes keener, and that participation has an aim – to highlight how easy complicity with a charismatic figure can be.  The tone is more provocative and, had the show ended here, I’d have still been happy.

There’s a final surprise though, where Project Dictator becomes very dark indeed. It turns out what we’ve seen is the performance of comedians who get into trouble with a real regime. Stripped and hooded, after their anarchy, the curtain rises again on a chillingly controlled mime show. Forced to perform, and showing their fear, will a final act of rebellion occur? Now that I won’t reveal.