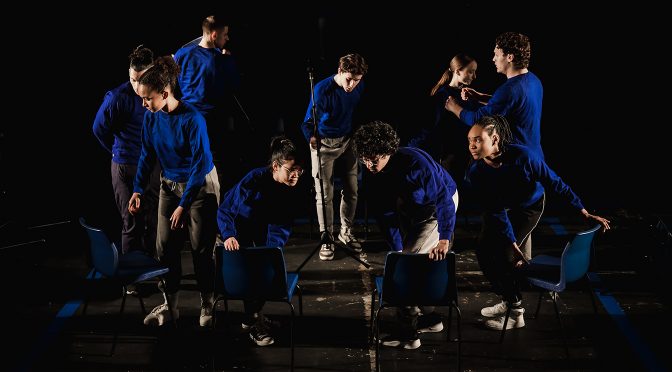 Ricky Dukes and the excellent Lazarus Theatre Company have taken inspiration for their new Shakespearean adaptation from work with acting students. The much-edited play (95 minutes long) is seen only from the perspective of younger characters. The result is surprising, shocking and exciting.

Elsinore becomes a mix of rehearsal room and therapy session. Sorcha Corcoran’s design is constantly rewarding. Alongside Stuart Glover’s lighting, the set is the key to investing such a well-known play with a fresh feel. Given the stripped-back props, and costumes that are sports gear or made of paper, the imagery is fantastic. Lazarus has a knack of creating scenes that burn themselves into the memory. As for including incense, I want some in every production of Hamlet from now on, please.

Remember, the ‘adults’ don’t appear in the flesh. While roles that are of indeterminate age are included (leading to a lovely performance from Kalifa Taylor as one of the players), authority figures are a disembodied voice from above. It’s creepy. Having Micha Colombo issuing sinister instructions and doing such a great job as both Claudius and Gertrude adds a dystopian atmosphere that’s in keeping with Jovana Backovic’s strong sound design.

So, what does this focus result in? The clear generational divide in the source material is highlighted. You need to know the idea and the play well before you go, something I’d normally criticise. But it is evident that the kids are not all right. Mental health – in particular suicide – is the main concern. This might be predictable, but you can’t say it isn’t present in the original. An effort is made to highlight all nine cast members in turn – we sense each deliberating over every action. You are left wanting more (from Alex Zur’s beautifully voiced Horatio, for instance), but the ensemble-led approach brings many thought-provoking moments.

Appropriately, Michael Hawkey, who takes the title role, embodies the production’s fresh approach and gives a remarkable professional debut. An angry young man who is also petulant, Hawkey’s delivery of the lines is confident and fluid. As a strong foil. Lexine Lee’s restrained Ophelia (I’ll admit this is to my taste) grounds the show. Director Dukes has firm ideas about her death that add to the production’s determined, confrontational approach.

This is radical stuff and, of course, it doesn’t all work. The Mousetrap scene tries too hard to inject humour (although Juan Hernandez and Kiera Murray do a brilliant job). I’m not sure why Yorick’s skull is taken from a fridge? To fit with the clinical feel? The duel is disappointing. Maybe Hamlet’s final action is a touch too far? And it’s a puzzle why Fortinbras isn’t mentioned. But the show raises questions in a prodigious fashion.

It turns out that the “safe space” promised is not delivered. This is Hamlet on a loop – like the circle performers sit in, we can go around again. It’s a chilling nod to the play’s versatility and reinvention. That Lazarus has given us a Hamlet unlike any other is an achievement. That the piece raises so many questions about the play and playmaking itself is astounding.