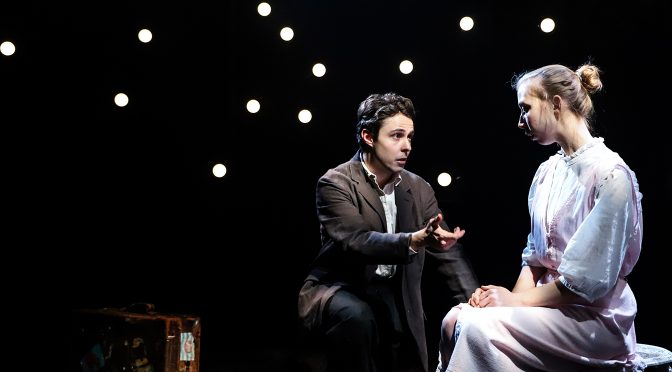 Along with its reputation for revivals, Neil McPherson’s west London venue has a knack for delivering great writing, often from abroad. Any play put on here is a safe bet and this UK première from Canadian writer David French is a great start to 2023.

A sophisticated script underlies the simple romance in Salt-Water Moon. Returning to his home in Newfoundland after a year away, the prodigal Jacob aims to win back his sweetheart, Mary, only a month before her wedding.

The characters drive the drama. Is Mary really as cold and angry as she seems? Bryony Miller’s excellent performance in the role shows the character’s “steel and fire”. And is Jacob genuine or just a “schemer”? Joseph Potter brings charm to the role but preserves a suspicion about the “brazen” Jacob that slowly melts away.

As the couple awaits the return of Mary’s fiancé (a vivid character, despite never setting foot on stage), French gives us far more than the suggested scenario of “a wolf and a lamb”, making this a romance we want to be rekindled. As the odds against the couple mount, so does the audience’s emotional involvement.

Motives for both characters are carefully revealed as they journey towards the truth so that the play has suspense despite a lack of action. Peter Kavanagh’s impeccable direction is suitably restrained and the minimal yet stylish set by Mim Houghton is similarly appropriate.

It is the confidence in French’s writing that stands out. Many a historical drama could benefit from such a sure hand – one that doesn’t feel the need for extraneous detail. Likewise, the sense of a real community – still dealing with the aftermath of World War I and full of inequality – shows us the lived experience of its characters with no sniff of a history lesson. This is impressive writing: Salt-Water Moon is a quality show through and through with a strong script skilfully produced. 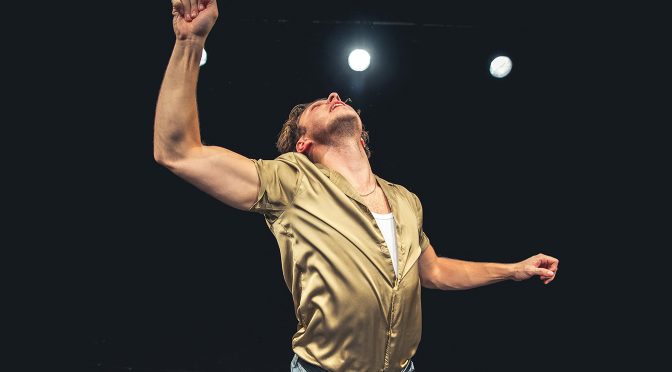 Tramp Productions continue to thrill fans of Philip Ridley during lockdown. While it’s hoped that the playwright’s cancelled show, The Beast of Blue Yonder, goes ahead one day, The Beast Will Rise web series was fantastic. Now another new monologue has been filmed for an exciting live stream.

The recording benefits from its location, albeit sadly empty, because of the extra space. In an excellent performance, energetically directed by Wiebke Green, Joseph Potter makes his character appropriately expansive. The extra room, after so much filming from homes, suits the energy of this latest creation from Ridley – an artist called Sasha.

The action centres on Sasha at his niece’s birthday party, an event he describes as a “new circle of hell”. But this is hardly the apocalyptic setting for otherworldly events Ridley often specialises in. East London is described with the playwright’s usual skill, detail and beauty. But it’s mundane Ilford that low-key events occur in. Don’t worry though, there’s nothing tame about this play’s spirit.

It’s a marvel to see how Ridley fleshes out characters who never appear; The Poltergeist becomes a family drama despite being a monologue. For Sasha, his family looks like a pretty Monet painting but is really a Damien Hirst installation. Yet it becomes clear a despised sister-in-law is just trying hard to be nice. And niece Robin is a kindred spirit whose “beautiful and scary” artwork could well summarise the feel of the whole play.

The Poltergeist isn’t scary because of the supernatural but since Sasha is so damaged. Potter conveys the character’s pain wonderfully, with anxiety keeping the audience on edge. Alongside an addiction to painkillers, Sasha’s grip on reality is blurred by his powerful imagination and his paranoia. So much life seems like a film set to him. A brief brush with fame and personal grief have caused profound damage.

Ridley challenges us to retain the sympathy Sasha deserves. It’s a challenge Potter’s performance doesn’t shy away from. Irascible, “sneering at everyone” and potentially violent, it’s easy to see this prodigy as spoilt and literally destructive. But Sasha still wins hearts, how?

A strong romance allows light into the play and a touch of stability in Sasha’s life. The relationship with his partner Chet is a constant presence. This being Ridley, the affair is sharp with sometimes painful truths. But the love is sincere and supportive.  Vividly rendered in Potter’s asides, Chet calls Sasha a “force of nature” – it’s hard to disagree. The outcome is a touch more hope than many of Ridley’s plays offer. Another surprising move from this master playwright, and a welcome one.