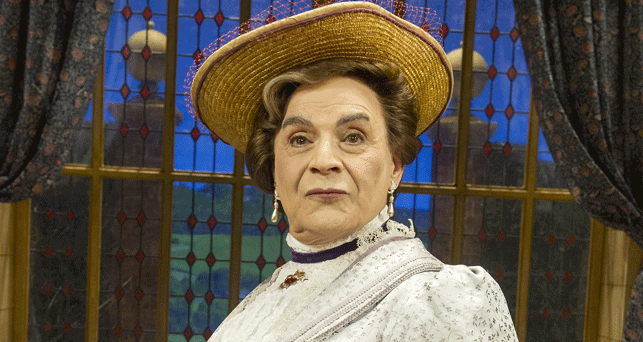 Adrian Noble’s high quality revival of Oscar Wilde’s masterpiece has more to offer than its gender blind casting of David Suchet in the role of the indomitable Lady Bracknell. It has to be stressed that Suchet is brilliant and very much a star. Without those Poirot moustaches, he’s surprisingly convincing in drag. Did I detect a nod to his former role when Bracknell interviews a prospective groom for her daughter? Notes are taken in a book you can imagine the sleuth using for clues. But more importantly, Suchet has a playful coyness that brings more laughs to a character with no shortage of great lines. The ultimate snob, Lady Bracknell’s disgust at that infamous handbag is as we expect, but Suchet adds a repugnance to the location of Bayswater that should go down in theatre history.

Just as good as Suchet is the strong cast that Noble utilises to create a zippy production with just the right amount of irreverence towards a classic. The four young lovers do justice to the play, while adding contemporary touches. Michael Benz and Philip Cumbus play the bachelors, John and Algernon, with as many laddish touches as the text will allow. The scene of them fighting over muffins is daring – I fear for Cumbus choking one night – but pays off. Emily Barber does well to suggest how she might, as predicted, face the “tragedy” of becoming like her mother, Lady Bracknell, while Imogen Doel adds a quirky youthfulness to the role of Cecily that feels strikingly modern. This quartet, plus Suchet, live up to the freshness of Wilde’s script and are sure to please admirers of the play. 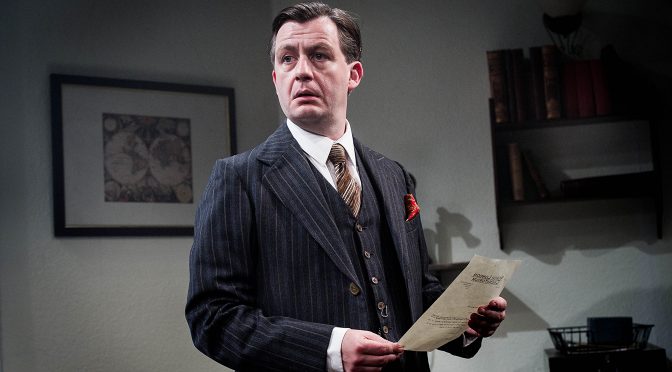 The latest “rediscovery” of a play from the Finborough Theatre is Cornelius by J.B.Priestley and it’s a real gem. A rich text, full of ideas, humour and drama, it is not to be missed. Not content with revealing this hidden treasure, last performed in London seventy years ago, director Sam Yates gives this superb play the excellent production it deserves.

Cornelius is at first a gentle, office-based comedy, with a cast of amusing characters sure to entertain. In a strong ensemble special note has to be made of Beverley Klein who takes on two roles with great skill. Yates handles the comedy superbly with a masterful nod at what a modern audience makes of the more dated moments. Similar intelligence is seen dealing with the social themes that so engaged Priestley: Cornelius runs a business in trouble, in dire economic times, with work interrupted by desperate salesmen and creditors. Cleverly, Yates handles any parallels to our current state with the lightest of touches.

What really interests is Cornelius himself; a fantastic creation, Yates and his lead actor Alan Cox understand him wonderfully. Bluff and blustering, appealing in his modesty and humour, Cox is perfect in bringing out nuance and adding the touch of poetry that makes his character fascinating.

There’s romance for Cornelius but his relationships with the devoted Miss Porrin and the down to earth Judy, finely performed by Annabel Topham and Emily Barber respectively, show two sides of unrequited love that makes the piece feel refreshingly real.

Cornelius contains a touch of mystery and tragedy as well, coming from his business partner, the intense Murrison remarkably portrayed by Jamie Newall, giving rise to dark observations, such as the “scheme and scratch” nature of office work, that are sure to ring true with many. But there is hope in Cornelius that the production embraces in proud style. Yates brings great focus to a tight script, making Cornelius a riveting work and this production is not just the finest on the fringe but one of the hottest tickets in town.

Written 17 August 2012 for The London Magazine