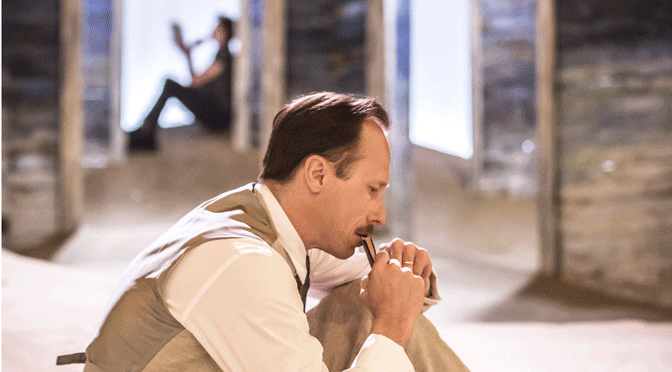 Small-town family life, along with youthful ideals and romance, are the subjects of Eugene O’Neill’s Ah Wilderness! Infused with poetry and memory, Natalie Abrahami’s sensitive revival adds a melancholic edge to this surprisingly gentle coming-of-age story.

This is O’Neill in an uncharacteristically good mood as he dwells on domesticity, reminisces about youthful rebellion and speculates about parenthood. Tinged with nostalgia and filled with ardour the play has an almost whimsical feel that’s quite charming.

Ah Wilderness! is also a memory play and a work very much for fans of O’Neill, who feels like a huge presence in this production. Set directions can be heard in the background and O’Neill’s younger alter-ego, Richard, performed vibrantly by George Mackay, is followed around by David Annen, who slips into smaller roles while taking notes and observing the action – suggesting a ghost at the feast – with great economy.

There are also strong performances from Martin Marquez and Janie Dee as Richard’s parents, while Yasmin Paige tackles well the uncomfortably written role of a prostitute. But the star is Dick Bird’s eye-catching set: a mountain of sand, cascading from expressionist doorways, that contains hidden props. This serves to emphasise time and is a sardonic hint at an unhappy future.

This production has a lot going for it, but, sadly, its stories of lost love and innocence are not quite interesting enough. It’s a shame that, for all the care, attention and ideas, the play itself is a little dull. It may be a quality affair with no shortage of insight – and I doubt anyone will be disappointed by attending – but this doesn’t feel like essential viewing. Sorry.