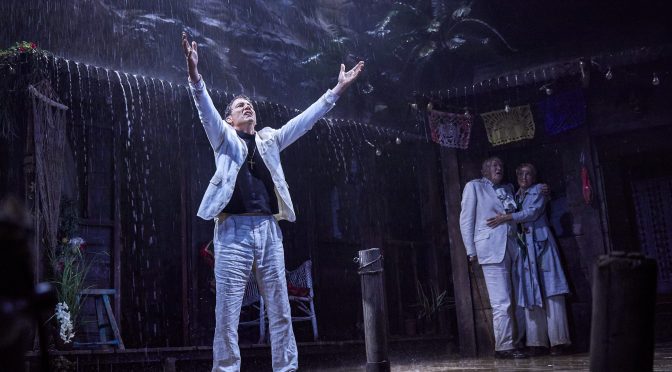 With a drunken defrocked priest battling his demons, while two women fight over his future, this play is classic Tennessee Williams. Brimming with disturbed characters and melancholy abstract observations, it may be verbose (it has a three-hour running time), but this fan lapped it up. And with the production’s star casting – a triple whammy of big-hitters – it’s a quality night out that deserves success.

Clive Owen takes the lead, filling big shoes as the not-so-Reverend Shannon, a part made famous by Richard Burton in the 1964 film. Owen seems uncomfortable at first but grows into the part and always manages a kind of charm; that’s quite something, given Shannon’s predatory violent abuse of women (no, the play hasn’t aged well in that respect). There are plenty of references to Shannon being a gentleman, and he could be played aloof, but Owen ignores this to give us a rough-and-ready chancer. Even the “crack up” that Shannon suffers is moving as we’re taken through the range of rage and infantilism that Williams too studiously lists. That Owen ends up overshadowed by his female co-stars is down to Williams more than him.

The iconic status of certain roles by Williams may have blinded us to the variety of his writing female parts, and here a blunt contrast between Hannah and Maxine proves illuminating. It’s a conflict full of ambiguity, notably between a spinster and a widow (roles that both characters play tellingly with). Anna Gunn is Maxine, manager of the hotel the play is set in. A “bigger than life” personality, she offers Shannon fun and vitality, but at what cost? Gunn makes her character’s loneliness, one of the play’s main themes, a subtle undertone. What Maxine would get out of a partnership with Shannon remains an intriguing question. But it’s Lia Williams as Hannah Jelkes who lights up the play. Twee one moment, a “cool hustler” the next, this is a magnetic performance of a mesmerising character. Has Shannon met his match? Does Hannah care either way? Carefully revealing the characters’ own troubles, this is a picture of eccentricity that Williams – the actress more than the author – grounds in real life. No matter how bizarre Jelkes or her aged poet grandfather (another strong performance here from Julian Glover) may be, they feel recognisable – and not just exaggerations in a Tennessee Williams play.

Controlling some of the playwright’s often inspired flights of fancy means plenty of credit for director James Macdonald. One approach is to embrace the offbeat humour, making the play surprisingly funny, with both Owen and Williams excelling here. Another technique is for a muted feel that roots the play in its bizarre love triangle and provides necessary focus. The Night of the Iguana is overpopulated – not just with that titular reptile – and nothing can redeem a group of German tourists who make random appearances for not-at-all-light relief. But Macdonald handles the numbers well. The talk of “spooks” who haunt Shannon is made to feel practical, a dramatic plot point rather than overplayed metaphor. Macdonald clarifies a battle between reality and the fantastic. The latter is Shannon’s favourite word, as Jelkes wryly notes, but it ends up serving as a good summation of the show overall.