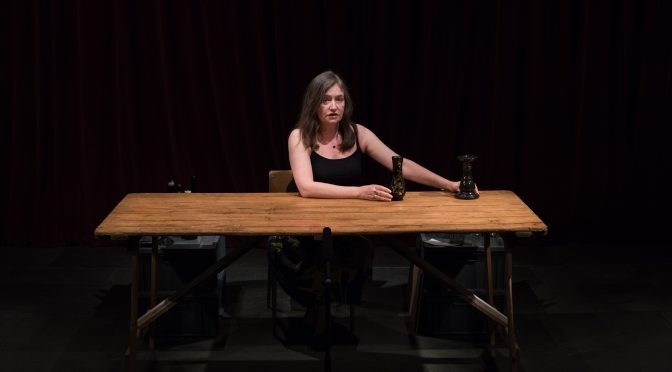 Shakespeare with a cast of condiments sounds simply daft. Presented on a desk, as advertised, bottles and objects make their entrances and exits, standing in for the characters, controlled by a single performer who retells the plot of the play. That all this is perilously close to parody can’t be lost on Forced Entertainment, the company responsible for hosting the whole of Shakespeare’s canon in this fashion. There’s a reverential air to the hour-long retellings that raises an ironic smile. But against the odds, it’s all strangely compelling and affords an insight into the plays that makes it a tremendous theatrical experience in its own right.

The performance I attended was Richard II. The monarch was a bottle of water, his attendants salt and pepper pots. Terry O’Connor recounted events slowly and carefully, occasionally pointing out famous lines. The retelling isn’t as neutral as it seems – alongside O’Connor’s engaging and clear delivery – there’s a subtle commentary added. Forced Entertainment’s technique exposes the mechanics of the play’s construction, which proves enlightening. Bereft of alarums and excursions, it’s an intense experience. The objects, empowered by your imagination, hold attention with surprising force – I don’t think I have ever felt so much for the role of Richard’s queen – here a cut-glass vase. Brilliantly simple and simply brilliant.