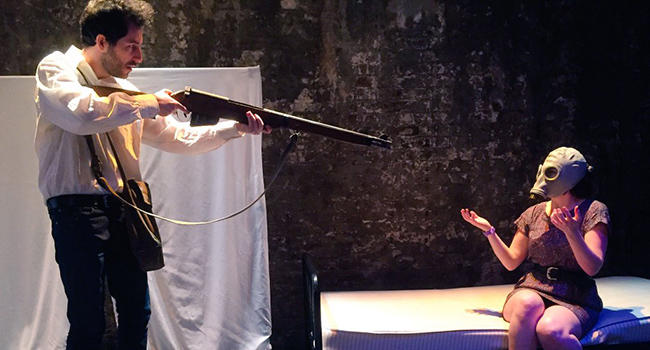 Michael Ross’ comedy drama takes us back to the 1980s and is a brilliant satire about that dire decade. The observations are spot on (there’s even a reference to Clannad) making this short play about three teenagers exploring a nuclear bunker full of laughs. Impressively, as local country boy Jack provides a dangerous adventure for London siblings Kirsty and Charlie, the jokes turn pitch black in the blink of an eye.

Our couple from the capital are blissfully recognisable. With a knowing eye on their “cosmopolitan identity politics”, Ross makes his subject more than just nostalgia. Kirsty has a realistically thin sophistication that Carla Rose renders superbly. Charlie is fantastically funny, his every line worth quoting – bourgeois is “French for Daily Mail reader” – and delivered gleefully by Josh Husselbee. 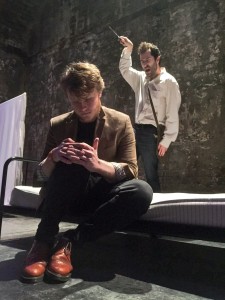 The central role is Jack, performed with care by Karl Mercer, who injects an intriguing childlike quality into his character. Twisted fantasies become all the more shocking and have a comic edge – some of the situations really shouldn’t this funny, and it’s a gift to make people laugh and then feel slightly ashamed for doing so.

There’s an interesting twist too – a parallel drawn between the danger and paranoia of the Cold War and that surrounding the AIDS crisis – an idea that deserves further exploration. Andrew Pritchard’s direction makes great use of the space (including a lovely scene with torches), which, although uncomfortable and smelly, is perfect for the underground locale of the play. But it’s Ross’s humour that makes the play really exciting. Intelligent and genuinely subversive, this comedy has an energy that indicates how much the writer has to say.