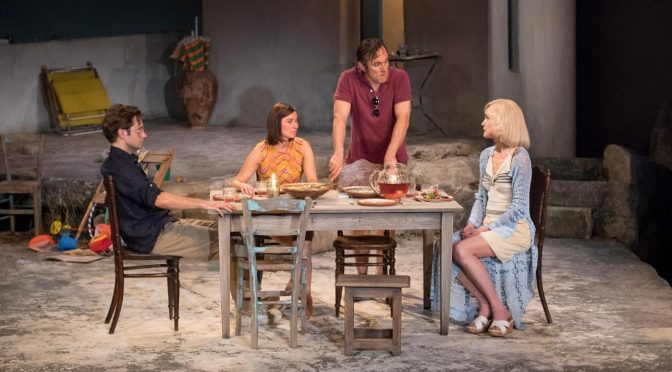 You can take the playwright out of Sloane Square and yet, it appears from Alexis Kaye Campbell’s new play, London is never far away. The subject here is the history of modern Greece, the coup in 1967 and its aftermath in the writer’s mother’s home country. But when an arty English couple snap up a second home at a bargain price, it feels as if the London housing crisis is giving rise to debates about politics and intervention.

Simon Godwin’s tight direction and a superb cast are the best things here. Theo and Charlotte, brilliantly performed by Sam Crane and Pippa Nixon, are a playwright and actress. Yes, the self-referentiality is tiresome, but it’s in keeping with the theme of personal responsibility in the play. Contrasts with an American couple, holiday friends, are fun and Elizabeth McGovern from Downton Abbey is a revelation as the drunken June, who likes her fruit punch without the fruit. It’s June’s husband, a shady American official called Harvey, that Kaye Campbell does best with: he’s a dark figure who claims his dirty dealings secure freedom and enable democracy (with its ‘twin’ the theatre) to flourish. Balancing charisma, intelligence and danger, Ben Miles excels in the role.

The laudable, openly declared question of ‘What would you do?’ is fair game. Cramming politics into a play is never easy, being blatant is fine. Nonetheless, it’s all too easy to dismiss many arguments here as naïve – left or right – even though Miles and Nixon are riveting. The effort is thorough, the play hard working and this surprisingly traditional piece is an entertaining, erudite affair. The playwright within the play is demoralised that his work is “quietly political”. Applying the same assessment to Kaye Campbell might not please him, but the passion often feels contrived, the arguments too easy, and so that label fits.