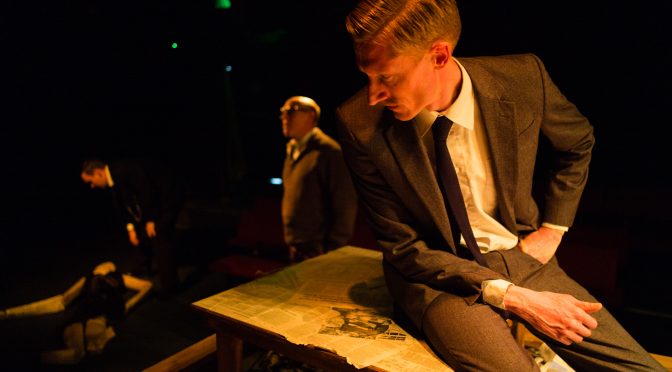 This welcome revival of Howard Brenton’s 1969 play, about the serial killer who secreted eight victims at his home, 10 Rillington Place, is exceptional for its fearlessness. A police constable and detective uncover bodies and interrogate the creepily reserved John Christie in a play that’s frightening, bold and adventurous. Brenton casts a cynical eye on the establishment, incompetent and clichéd by turns, while his portrayal of the psychopath, including explicit sexual kinks, is unflinching.

Director Mary Franklin handles the eccentric text bravely. There are pauses aplenty and our first encounter with Christie, masked and masturbating, is truly bizarre. And Franklin secures three superb performances. Daniel Buckley plays the nervous young copper with a taste for nasty limericks, who impresses with his puppetry skills in a flashback scene that has a prostitute encountering Christie. Jake Curran is just as good playing the Inspector, a tricky part full of irony and repression that he makes thrilling. Murray Taylor takes the title role and is truly scary. Unafraid of making eye contact with the audience, he guarantees goose bumps, but this isn’t a shock-horror affair. Hugely committed, Taylor shows Christie as a part of society no matter how abhorrent his actions.

For all this – three of the finest performances you could wish for on a stage – the real star is designer Christopher Hone. With a giant newspaper-filled rectangular box performed on, in and around, this is a set full of surprises. There’s literally a balancing act for the performers, which adds a tension of its own, while the concept serves to focus attention and raise questions, just like the play itself.