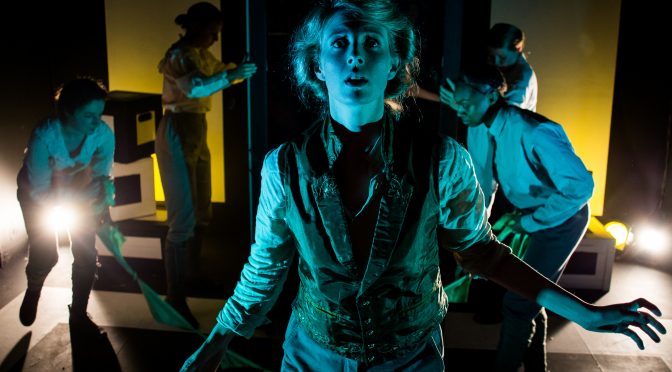 Examining conflict through science, in particular the chemistry behind World War I, Tony Harrison’s 1992 play is full of fascinating history. The research behind weaponry and drawn-out moral questions are consistently interesting: the work of Fritz Haber on both fertilisers and poisoned gas – and the Maxim brothers’ inventions – are stuff it’s unlikely you learned at school. Combined with a background of Imperialism and societal change (from women at work to spiritualism), Square Rounds is epic, even before you consider it is written in verse.

Introducing rhyme almost from the start, Harrison’s text cannot fail to impress. The use of language is joyous, which sometimes feels discordant given the subject matter. Rather, taking on science – pointing out its magical overtones – the lines issue a challenge as the lyrical work matches Rationalism with cunning and a ruthless edge. The play is remarkably cold, chilling at times, as it lays bare the inevitability of arms races or ironically sets out arguments for mad weapons in a logical fashion.

Some heart is added to the play with the relationship of Haber and his wife Clara Immerwahr, also a scientist, who argues against her husband’s collaboration with the Kaiser. It’s the strongest scene and has the best performances, from Philippa Quinn (pictured top) and Gracy Goldman, respectively. The production boasts all-female performers – a bold casting decision and a clever one – there are several scenes where the action is more layered as a result. The cast also doubles up effectively, and the multiple roles are tackled well, especially by Letty Thomas. The performers are not helped by an insistence on using the accents of various German and American characters. True, much is made of nationhood in the script, even some puns, but the delivery here is too broad and the result sounds forced. Thankfully, the technique isn’t adopted for a scene set in modern-day China (I told you the play was epic) and the result is much happier.

The question of accents aside – surely a misjudgement – director Jimmy Walters has a good go at matching Harrison’s wit and imagination. The production is clear and concise, the use of music more hit than miss, the set (from Daisy Blower), with its connotations of magic acts, is clever. If not quite the revival a play this strong deserves (it was originally staged at the National Theatre’s Olivier and its ambition calls out for a large venue), there’s plenty of talent to make this opportunity to see such an original piece worthwhile. There’s quite rightly a lot of commemoration of World War I in this anniversary year, but little of it has a perspective this novel or long-sighted.