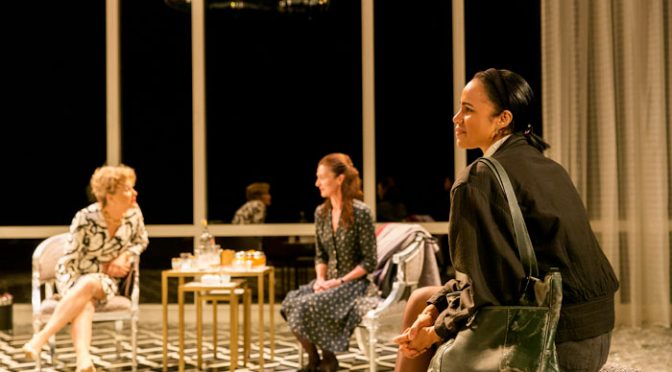 Abi Morgan’s play imagines a strained meeting between a dictator’s wife and her best friend, while they wait with a photographer and interpreter for a portrait shoot that’s running late. The location is an unspecified imitation democracy on the brink of civil war. It’s not a bad setup to explore politics and art, and Morgan does both with insight. The fact that all four characters are women makes a welcome change.

Morgan’s style might rankle some: the characters voice their inner thoughts and memories, while scenes are repeated, at different speeds with cuts to the dialogue. Remarkably, Morgan makes the play easy to follow and, for my money, the technique is a success. Knowing what someone is thinking, hearing them play with the presentation of events, alongside confusion over language in a very literal sense (the photographer doesn’t speak the local tongue), enforces unspoken communication and inner turmoil marvellously.

The four strong roles have attracted four great performers. The outsiders on the scene are Genevieve O’Reilly, who plays the hard-nosed photographer, managing to make this cool observer compelling, and Zawe Ashton, who acts as her interpreter, with an eye on the make. Ashton’s role is tough – she has to show us the desperation of regular people living in this toppling state, and this is done without making her seem a device. But the really interesting dynamic is that between Sinéad Cusack and Michelle Fairley, the president’s dolled-up wife, who might just be the power behind the throne, and her browbeaten best friend. Both actresses give tremendous performances.

Splendour has a simple plot that, a little like the characters, comes close to predictable. But what Morgan does with her, often startling, technique is the real source of interest. If all the stopping and starting of scenes sounds a little pretentious, the structure and rhythm of the text has a very down-to-earth function – to create tension. Weapons sound, but in the distance, specifics of time and place are never mentioned and no politicians or revolutionaries, as such, appear on stage. Yet Morgan has created a unique… OK then… splendid, political thriller of great originality.