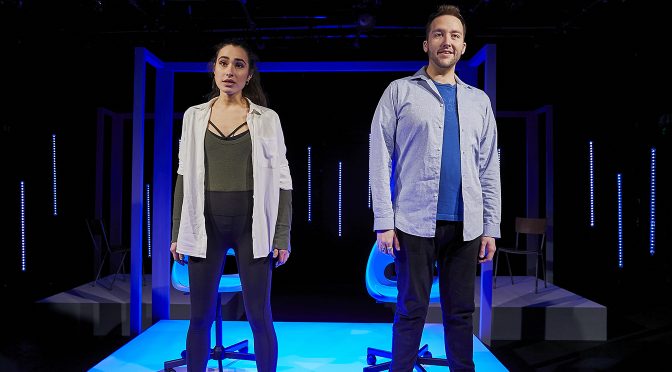 With so much of our lives spent online, a musical about the internet seems apposite to our lockdown times. The twist for this show, from Francesca Forristal and Jordan Paul Clarke, is that it is a verbatim piece. All the words spoken or sung are taken from the internet. The result is a snapshot of a recognisably confusing world, refocused and clarified with considerable talent.

Forristal and Clarke are a gifted duo. Their music is pop-inspired, electronic and generally perky. While sampled speech is not to my personal taste, it is integrated well. Blissfully, the show is streamed live. That more than makes up for some technical glitches on the first night. Forristal and Clarke’s voices are strong, their acting, taking on different characters, commendable. Adam Lenson’s direction aids clarity.

The subject matter is wildly ambitious. And there are missteps. Like plenty of online content an edit would help. Touching on Facebook’s treatment of outsourced employees makes for a great number but is an issue that needs more time. Similarly, the topic of censorship feels tacked on – it deserves a show all of its own.

Overall though, the book for Public Domain is impressive. The words, chosen for interest and importance rather than inherent musicality, flow remarkably well. Focus comes, first, from two fictional YouTubers (SwaggyWan and Millies Fitness). Made from several sources, they are credible creations that show us the positive and negative approaches to life online. Both prove funny and moving and leave you wanting to subscribe.

There’s another ‘pairing’ in the show: those YouTubers alongside Facebook mogul Mark Zuckberg and his wife Priscilla Chan. Television interviews or congressional hearings (which might remind you of the Donmar’s show, Committee) provide insight into a very different world from the struggling influences. It’s a strong, thought-provoking, contrast that works well.

When it comes to how these different sets of people are presented, Forristal and Clarke gain further respect. The music provides a sincerity and emotive power to plenty of glib comments (it’s the internet, remember). Due attention is paid to the positives of the social networking; it helps people feel “a little less alone” and an unexpected finale emphasises this important point. Yet an underlying cynicism shows an intelligent approach. No matter what happens, our YouTubers want you to follow them!

The web is worldwide but at their best, Forristal and Clarke catch most by casting a narrow net. It’s easy to imagine Public Domain as a project as much as a finished piece. The subjects covered are so topical, further versions could surely be developed. And I know I’d watch.