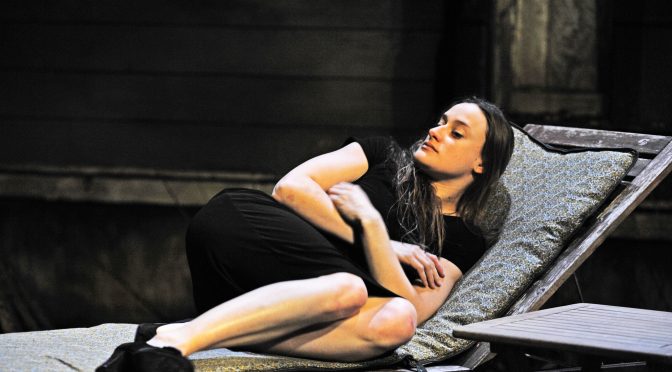 Immediately before the interval of Proof, just opened at the Menier Chocolate Factory, the heroine drops a bombshell, claiming that she, and not her recently deceased famous father, has made an important mathematical discovery. It’s a fantastic moment of drama – so much so you can’t wait for the break to be over, which is surely indicative of the high quality of both play and production.

The genius father, who fought a losing battle for sanity most of his life, was looked after by his devoted Catherine, who put her own career on hold to care for him. Dealing with his death is proving difficult: in the first scene she talks to his ghost, portrayed with great emotional control by Matthew Marsh, and there’s a complex sibling relationship with her sister Claire, played wonderfully by Emma Cunniffe, to factor in. Add to the mix a former student of her father’s, Jamie Parker, sniffing around old notebooks for an academic scoop, and there are plenty of components to this fascinating equation.

David Auburn’s artfully written play deserves all the acclaim it has received since its New York premiere in 2000. It’s a controlled piece, easy to admire, full of subtlety actors can work with. Clearly visualised, the text must be a joy to direct; Polly Findlay does a superb job and brings out some humour with the help of Parker’s affable stage presence. Playing another Hal, after his triumph as Prince Henry at the Globe last year, his Catherine here takes the lead. Fearful that she shares her father’s instability as well as his intelligence, this is a demanding role for both actor and audience. Mariah Gale is wonderful in the part – frequently on the brink of tears yet with a wicked sense of humour – this play gives all the proof we need of her talent.

Written 22 March 2013 for The London Magazine