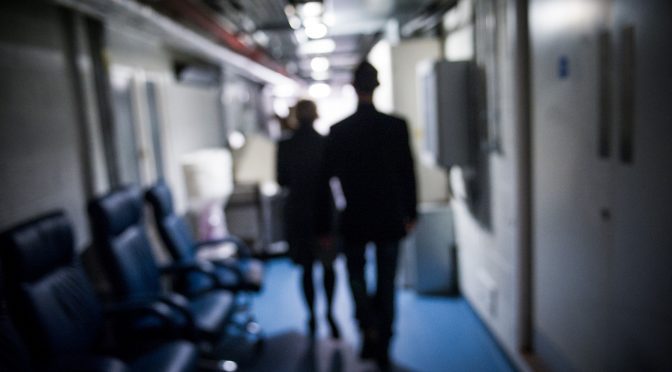 Although it’s a tough job, theatre critics should aim for some semblance of objectivity when they write. That makes Above and Beyond, currently playing at the Corinthia Hotel, difficult to deal with. Billed as “one-on-one immersive theatre” the thrill is that each audience member can make of it what he or she wills. Participation, which many, including reviewers, dread, plays a big part. It’s an exciting adventure, best commended by saying that at the end it’s something you’ll want everyone to do.

When it comes to the ‘doing’, Above and Beyond is a tremendous achievement on the part of its cast and apparently super-human director Mimi Poskitt. After being escorted to the starting point in the lobby, you launch on a solo journey in and outside the hotel, up and downstairs, meeting all kind of characters. Of course your every move is plotted to perfection and the mechanics of the operation are almost distractingly smooth – you can’t help looking out for other participants and maybe start to feel a little paranoid that everyone you see is a member of the cast. The plethora of details is delightful and the execution faultless. And give yourself some credit – interacting with the cast like this, no matter how skilfully encouraged, is unusual and engrossing.

Such is the level of complicity established, I confess my allegiances lie with the team behind the show, the Corinthia’s ‘Artists in Residence’, Look Left Look Right. There’s a charge from the unexpected that they utilise so any plot spoilers would be unfair to this hard working crew. Suffice to say, don’t expect a narrative as such, rather of collection of stories, written by Morgan Lloyd Malcolm and Katie Lyons, inspired by the hotel, its staff and the international elite who stay in a place like this.

The scenes designed to provoke sentiment and nostalgia, with a nod to the location’s history, worked less well – for me anyway – but the majority of Above and Beyond has a sense of fun, a welcome change from much theatre in this format, and an intelligent wit that recognizes the bizarre situations. This is one of the funniest nights I’ve had in ages – I couldn’t stop laughing in several scenes. And a couple of teasers: expect a real giggle in the spa and check your face for make-up before you leave.

Lloyd Malcolm and Lyons have an impressive sense of independence despite the overwhelming generosity of the hotel. Going behind the scenes could prove awkward and a marketing seminar you are invited to join is close-to-the-bone funny. But the Corinthia is its own advertisement, with interiors gorgeous enough to awe a humble theatre critic and a penthouse suite I felt privileged to visit. The real members of the hotel staff deserve credit as well since the experiment must make more work for them. Let’s hope they get a chance to experience some of the magic themselves.

Written 20 March 2013 for The London Magazine