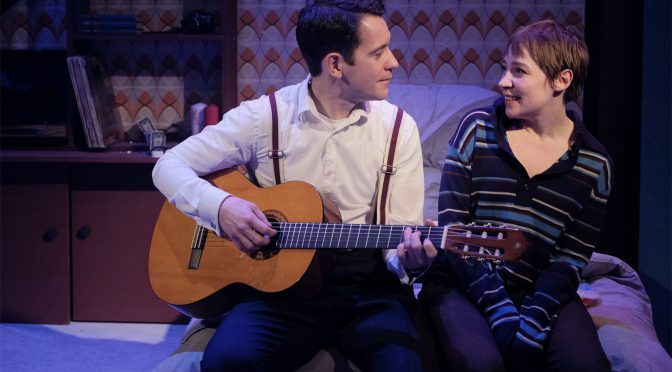 The credentials for this musical are impeccable: a book by Neil Simon, with music and lyrics fromBurt Bacharach and Hal David. That should be enough to get you booking tickets. The endearing, nostalgic piece follows the adventures of New Yorker Chuck, who lends his flat to his bosses for their extra-marital affairs, while his own love life flounders.

Adapted from the 1960 movie The Apartment, it’s the script that dominates. There’s a lot of Simon here – no bad thing – playing with cynicism, packing in jolly touches and good plotting. If the songs don’t fuse into a score in the manner that makes some musicals heavenly, they are great numbers, with a trip to the back catalogue sublimely incorporated as an extra treat.

The smooth sounds are well performed and Bronagh Lagan’s direction has a calm pace that’s appropriate – disguising how much work her dozen cast members are doing – so the show feels like relaxed fun. There’s swinging going on (it’s the Sixties, after all) but, despite the Mad Men vibe, evoked especially well by Paul Robinson as the arch philanderer Sheldrake, the tones are pastel and the atmosphere oh-so cool.

Darker shades are present and handled well by leading lady Daisy Maywood, whose character Fran is driven to attempt suicide. The sobering moments are a little jarring and stem from the sexism within Promises Promises itself. Women are, literally, backing singers, playing secretaries and ‘pick ups’ (providing a blissful cameo for Alex Young). And the office Christmas party would give an HR department a fit. Lagan deals cleverly with the unsavoury middle-aged executives, presenting a collection of more sad than mad men that we can laugh at. It’s a sensible move, and the cast makes it work for them.

The saving grace is our heroine, at times displaying an emotional depth that overwhelms the show – welcome nonetheless – and Maywood’s acting is as strong as her powerful voice. The equally impressive Gabriel Vick, playing Chuck, joins her. Ostensibly, this is his character’s story. He’s a “puny” figure that Vick makes winning with perfectly pitched direct addresses to the audience. Fantasy conversations only endear us to him further. It’s the two leads who make the show, culminating in a gorgeous duet that is the fulfilment of all the talent on offer.