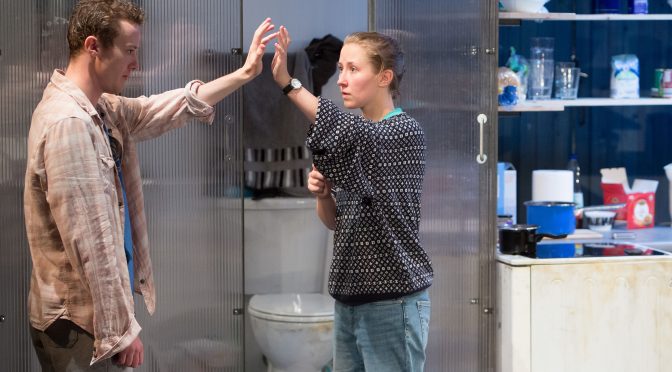 Katherine Soper’s play tackles modish concerns about mental health and the world of work, as two siblings struggle against the benefits system and a menial job on a zero-hours contract. A joint production with Manchester’s Royal Exchange, the play is at home at the Royal Court; there isn’t just a kitchen sink, there’s a bathroom one as well. But suspicions should be suspended: Soper has written a play with real heart, a well deserving winner of the Bruntwood Prize for Playwriting.

For all the monotony in the characters’ lives, Roper covers a gamut of emotions, while Matthew Xia’s direction, with strong sound design from Giles Thomas, nurtures her considerable skills.

The stress in Tamsin’s life, brilliantly portrayed by Erin Doherty, is well depicted and instantly recognisable. Reduced to tears more than once, Tamsin’s own wishes are balanced with responsibilities to her sick brother, combining care and understandable frustration.

With the siblings’ crippling obsessive behaviour, Soper brings insight into a condition increasingly depicted on stage and adds tension. Rendered with almost unbearable intensity by Joseph Quinn, this young man becomes a danger to himself and a fascinating figure with Christ-like connotations from his self-inflicted injuries.

Soper appreciates we can only stand so much doom and gloom and deftly introduces some sweet comedy. Doherty takes us touchingly close to her character’s hopes and gives us the giggles with a rendition of a Meat Loaf song, part of a budding romance with a younger colleague made all the more appealing by a performance from Shaquille Ali-Yebuah: any actor who can make a role this charming is sure to have a bright future.

There are lighter moments also from the mild satire against big business. In the packing factory, neither Tamsin nor her potential boyfriend falls for the inspirational slogans, despite their desperation for a job. But cleverly, the awful working conditions are depicted dispassionately, with an intelligent role for Aleksandar Mikic as their manager.

Digs against faceless organisations come alongside camaraderie. Small acts of kindness in the face of big problems are part of Wish List’s most effective passages – which focus on hope. A lit candle, shared cigarette or high five, take on the significance of communion that is simply beautiful. Soper wants this look at vulnerable lives to be dignified. Her play wins respect as a result.