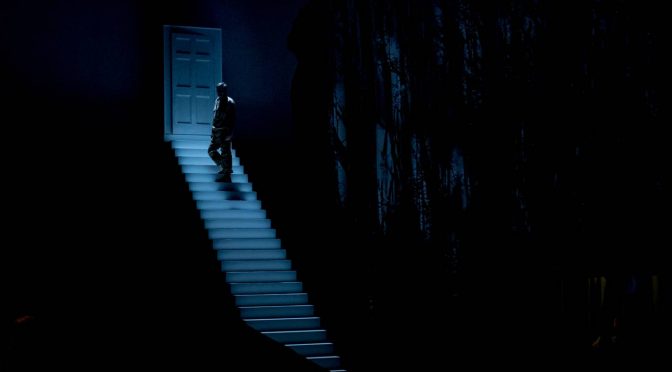 Maybe it’s Ibsen’s status as a playwright, or the position of this work in theatre history, but Peer Gynt has a special place in the canon. This is the play’s third outing on the South Bank – and it even has its own sculpture park in Oslo! Based on a folk tale (surely a take on the Everyman story), this life story over 40 scenes cares little about the practicalities of staging. Taking in tall tales and the supernatural, much of what happens is downright crazy. While Ibsen’s ambition is clearly inspiring, and it can be interesting to see how theatre makers deal with it, the vision itself is not. The relentlessly imparted messages mix wisdom with humour and anger in a manic fashion. It’s a bit like being shouted at. And, over three-and-a-half hours, being shouted at for a long time.

Everything in Peer Gynt has a meaning, with its symbols and metaphors continually highlighted. This becomes draining. David Hare’s version works hard to tackle the didactic style with self-conscious awareness and injects a considerable energy. Setting the action in Scotland (the show is co-produced by the Edinburgh International Festival) is used to good effect. Updating the play to the present day leads to even more laughs. But the satire, while a good way of handling Ibsen’s misanthropy, doesn’t contain any surprises. Perhaps real politics are too crazy to keep up with, but casting Peter as a Donald Trump figure or calling the World Economic Forum hypocritical seem too tame.

Director Jonathan Kent also does an excellent job of making the action interesting. There are even a few songs thrown in to keep us on our toes. Richard Hudson’s design is full of appropriately quirky touches and video work from Dick Straker is strong (especially in a shipwreck scene). The massive cast is handled expertly and there are some great performances: Tamsin Carroll stands out as the Troll Princess, while Guy Henry and Oliver Ford Davies, whose roles as The Weird Passenger and The Button Moulder rank as similarly bizarre, bring a sense of ease to the stage. Yet it’s really only Ann Louise Ross as Peter’s mother who has a substantial character and leaves an impression – which goes to show how much the play relies on its central performer.

James McArdle steps into the well-travelled shoes as Peter/Peer. He is excellent. Technically, he can hold the massive Olivier auditorium and his physical fitness, running around all the time and barely off stage, is impressive. He handles his character’s ageing with a light touch that indicates his justified confidence. Best of all, he injects a warmth into Peter that keeps you watching. From the start, driven by anger and ego, McArdle brings out the character’s humanity, distracting from the many abstractions in the play. Peter is a unique hero, who we follow despite his many unattractive qualities. This production is as entertaining as you could wish for, and it really is a star performance from McArdle. But it’s still difficult to understand the play’s strange hold over the theatre.