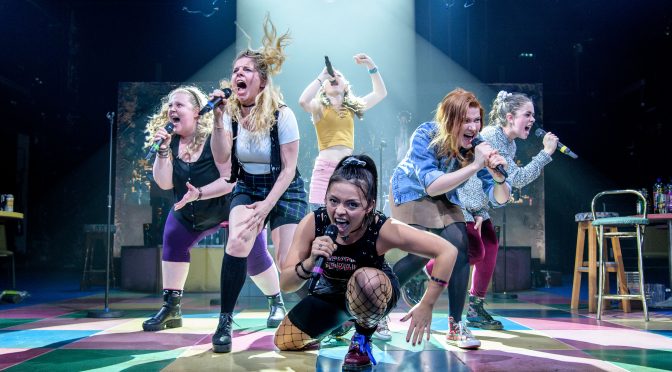 A big hit on the Edinburgh Fringe and at the National’s Dorfman auditorium last year, this coming-of-age show is now out on the town in the West End. Following the day-long misadventures of convent schoolgirls from Oban, let loose in the Scottish capital for a choir competition, it’s raucous fun, peppered with thought-provoking moments and fantastic singing.

Lee Hall’s adaptation of Alan Warner’s book (The Sopranos) is adventurous and tackled at suitable speed by director Vicky Featherstone. Partly a concert – and the singing deserves a second mention – and then a collection of character studies, the six performers all do a terrific job. Frances Mayli McCann’s voice is particularly strong and supremely versatile, while Dawn Sievewright and Isis Hainsworth do well with the strongest story lines, as a young lesbian and a cancer survivor, respectively. There’s plenty of drama in these teenage lives, but a spirit of humour presides. Caroline Deyga delivers insults with enviable skill while Kirsty MacLaren and Karen Fishwick are especially good when taking on male roles. There’s a pretty shaming view of masculinity here, but I am not going to argue with it – I wouldn’t dare take these girls on.

“Really, really rude” language is the warning all over the theatre foyer. And they aren’t joking. The swearing is enough to make a submariner blush – let alone what else they might have to say about him. The discussions of sex are… frank. Impressively, the drink- and drug-filled binge is fun but not glamorised. For all the crudity, Hall and Featherstone want this to be a play that respects its characters. The girls know they aren’t angels but they aren’t hypocrites either. Telling teenage life as it is, even if it makes some squirm, makes this a mature show about youth.