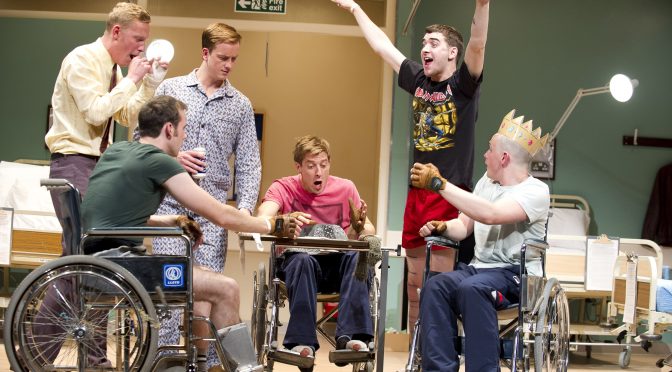 Jonathan Lewis’s Our Boys is nearly 20 years old – but it’s aging very well indeed. Set in a military hospital, and based on the author’s own experiences as a Potential Officer, it’s a rites-of-passage drama about young soldiers recovering from serious trauma. Our Boys is a well-crafted and traditional affair of simple, effective story telling.

A performer himself, Lewis has created the kind of roles that actors love since each character develops almost on cue. We know that these young men will bare their souls, but with each revelation the play gains in power. Lewis never slips into patronising his creations, while director David Grindley has marshalled his impressive cast into a believable cohort.

Lewis Reeves has to be singled out. As the most physically injured solider, his painful route to recovery is deeply moving and wonderfully performed. Jolyon Coy plays P.O. Menzies who shares the ward with the men he may one day command, with sensitive conviction. Laurence Fox gives a tremendous performance as Joe, a natural leader who delivers the most dramatic, genuinely shocking scene with steely skill.

The earthy humour of the piece may wear thin, but Lewis uses it to bond the play and it’s delivered well enough. Our Boys isn’t free of cliché but, after all, our insecurities are pretty universal and seeing them in these young men under pressure has tremendous power. The disastrous drinking game they play shows the best and the worst of characters we have learnt to care for: they really have become Our Boys, a fact that shows the strength of the play and the performances.

Written 4 October 2012 for The London Magazine