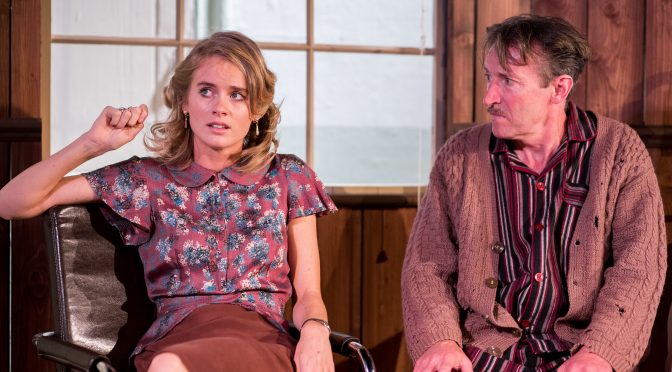 Tony Cox’s play, a sell-out at the Old Red Lion Theatre, should enjoy continued success with this transfer south of the river. A careful mix of literary biography and period detail, it’s a calm and stately piece, with Jimmy Walters’ direction adding to the air of polished professionalism.

As George Orwell lies dying in a far from down-and-out hospital room, he declares his love for the young and glamorous Sonia Brownell. The proposal is that she becomes his “literary widow” as much as wife and, to the quaint surprise of all, she accepts.

Orwell’s eccentricity is utilised for entertainment. With the exception of a brief Marquis de Sade moment it’s all endearingly old-fashioned. And there’s masses of name dropping fun as Lucian Freud draws Orwell’s portrait and starts an affair with Sonia. Freud makes a lovely cameo for Edmund Digby Jones who doesn’t hold back on the Bohemian flair – all the better as a foil to “Grumpy George”.

Cressida Bonas takes the title role, while Peter Hamilton Dyer as Orwell is really the focus. His is a careful study – his depiction of tuberculosis impressive, while conveying insecurities, intelligence and flashes of rage. The perfectly cast Bonas feels like a natural in the part – you can easily imagine her at the Café Royal. It’s a shame we run out of time for Sonia’s character to develop. What she’ll do as Orwell’s executor is full of dramatic potential.

Disappointingly, the play falls apart at Orwell’s death. There’s a bizarre rant from his publisher (played by Robert Stocks), left sweating in the scrabble to send us away with some facts. It’s a clumsy lapse of confidence to end a pleasantly nostalgic and convincing glimpse at literary genius in a bygone age.