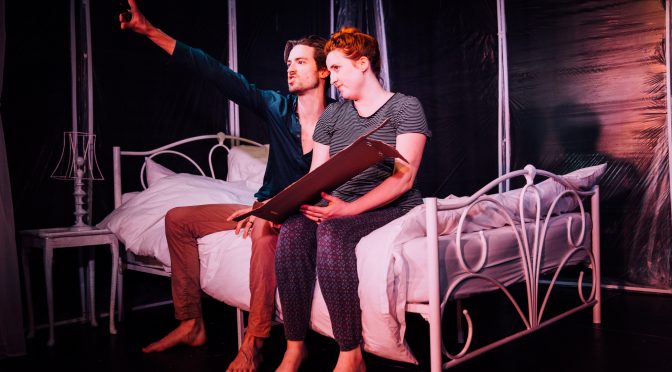 I live opposite a big hotel, so I’m careful to draw my curtains in case the view of me spoils anyone’s holiday. But the couple who live opposite two uninhibited youngsters in Ron Elisha’s play aren’t so lucky. From an initial frisson watching their neighbour’s sexual gymnastics, using opera glasses, then bringing in the popcorn, their voyeurism ultimately has distressing consequences.

Idgie Beau plays Grace, whose unbalanced empathy with the young girl across from her leads to neglect of husband and daughter. Beau gives a convincing depiction of mental angst and her character’s developing pregnancy. She and Charles Warner make a great couple that it’s hard not to care about. Warner makes the support his character offers believable and the injections of common sense a dramatic relief.

Director Dave Spencer has secured strong performances but has a misplaced faith in Elisha’s text. Some pretty obvious questions are ignored to look at the ideas around living vicariously and mental health – it’s hard to credit the couple opposite are so ignorant they are being observed – but the concerns feel both forced and undeveloped. And the play’s structure is frustrating: tiny scenes mean we end up watching the cast repeatedly putting on and taking off T-shirts.

Window has a neat idea behind it and is well acted but the themes aren’t given their due and the ending is flat. Like the voyeurism in the play, it may feel worth watching at first but is ultimately unsatisfying.