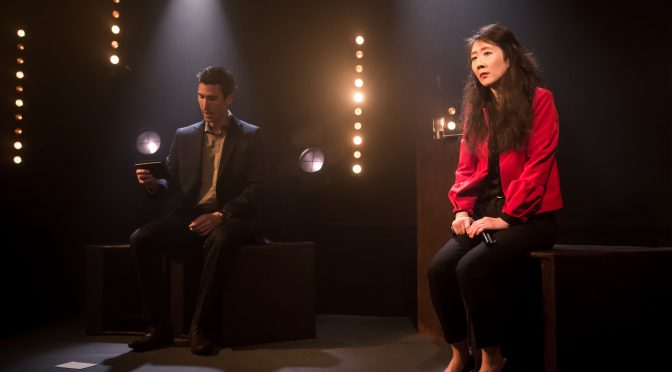 The celebrated American playwright Christopher Chen uses the work and death of scholar Iris Chang to create a complex philosophical play. Structured around a book tour for Chang’s best-seller The Rape of Nanking, billed as detailing the forgotten holocaust of World War II, the play follows the tragic journey towards the author’s suicide. The piece is powerful and demanding.

Elizabeth Chan gives a superb performance in the lead role, reflecting Chang’s articulacy and fragility. Presented as a series of lectures, interviews, and then visits to her therapist, as an insight into mental health Chen’s writing is disturbing and poignant. The roles of the host, husband and doctor are all played by Timothy Knightly – a remarkable performance – and the drama escalates skilfully, evoking Chang’s increasing pain, paranoia and grasp on reality.

Both the story of Nanking and the effect studying such trauma had on Chang are embodied in a series of mystical encounters: with a Japanese soldier, an anonymous victim, and real-life heroine, Minnie Vautrin. The massacre’s moral importance, dramatically essential as Chang becomes “trapped” by her work, is depicted with respectful conviction by all. And the direction from Georgie Staight is impeccable throughout (aided by Matt Cater’s lighting). But these scenes from “another dimension” are less successful. A trio of performers struggles with such token appearances and some ponderous moments. While our attachment to Chang deepens, these forays into philosophical speculation pale.

The text is full of complicated concepts, some of which are surely dead ends, and it would be helpful to point those out more clearly: a representative for modern Japan proves a particular stumbling block. But Chen’s ambition is bracing and the considerations of monism, evil and time are all fascinating. There’s nothing patronising, and I confess some of the ideas were over my head even before having them expressed through the prism of mental illness. If occasionally laboured, Into The Numbers is impressively intellectual, layered and invigorating. Just make sure you’ve blown away any Christmas cobwebs from your brain before trying to tackle this one.