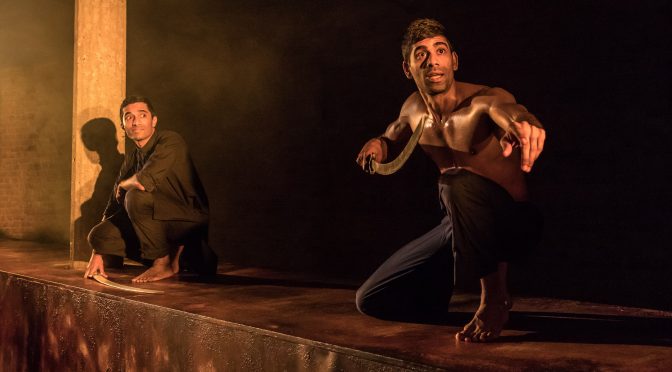 Joseph’s play is a marvel of economy – 80 minutes packed with ideas, emotion, comedy and tragedy. Two guards on the Taj Mahal construction site are forbidden from seeing the mausoleum before its completion, by decree from Mughal Emperor Shah Jahan. The tension between despotic whims and these average guys escalates into horrific acts that are the stuff of myths (the play has its share of gore) and raise profound questions about aesthetics and the individual in society. Yet Joseph deals with his themes lightly – no matter how dark and dangerous the drama gets.

Lloyd embraces the play’s contemporary feel, following instruction in the script that dialects are not to be used and highlighting every possible moment of relief in shocking circumstances. The performers – Danny Ashok and Darren Kuppan – both deserve the highest praise. Kuppan makes it impossible not to love his character Babur’s “fancies and prophecies and inventions”. The more pragmatic Humayun more slowly grows on us (through our appreciation of his family life) a feat Ashok manoeuvres to give full force to both men’s tragedy.

Gilmour’s industrial aesthetic, recalling for me the work of Richard Serra or Richard Wilson’s 20:50 installation, looks fantastic. Working alongside lighting designer Richard Howell, this set is a real stunner. And Beauty, with a capital B, is important here. There are moments of wonder at architecture, also nature. And a beautiful friendship: touching scenes between the two men do more than lead to the final trauma. Babur and Hamayan’s dream of a different life produces that ingredient of hope that provides a “wow” to the play as a whole.